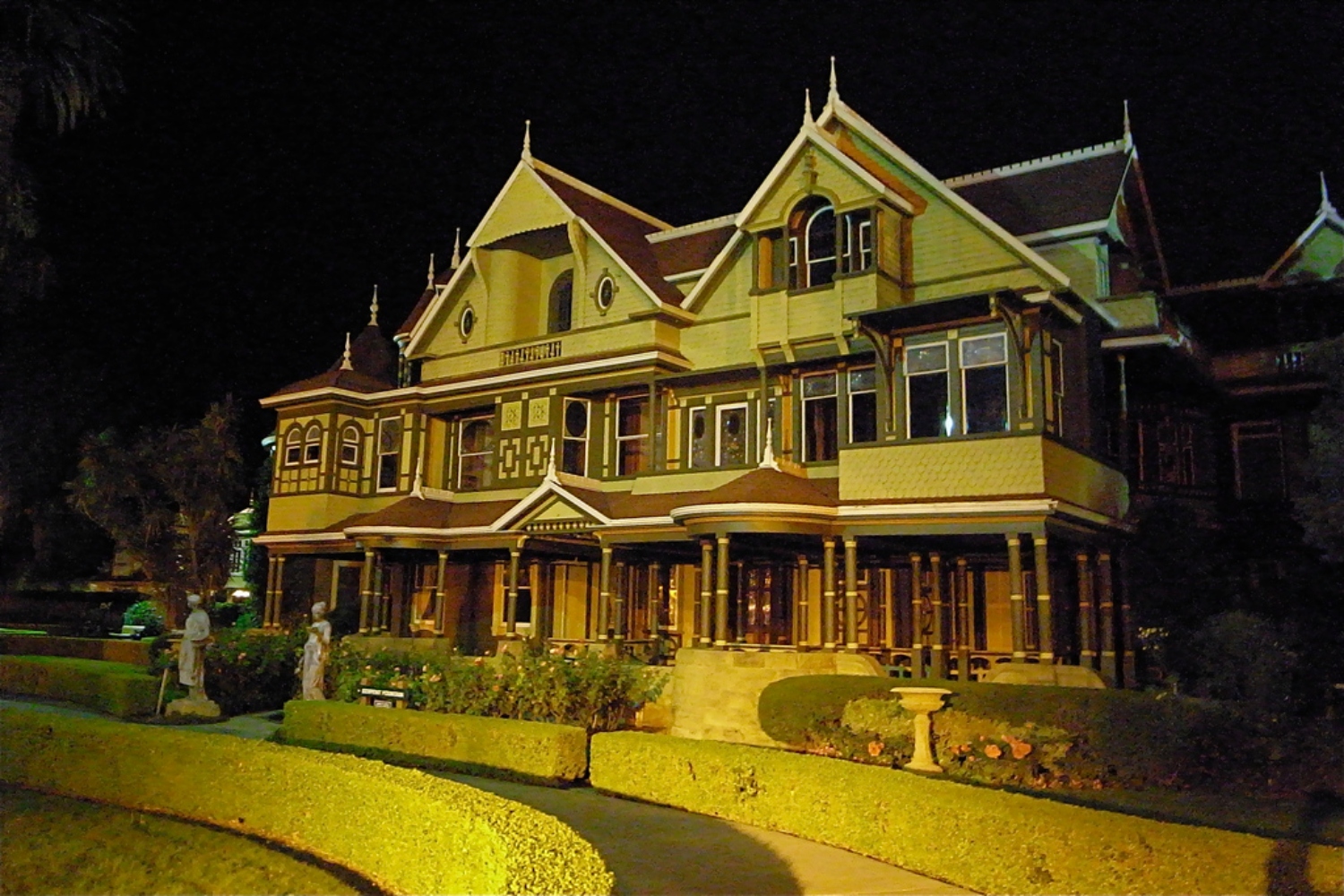 The Winchester Mystery House in San Jose, California has been on the Travel Darkly must-see list for many years. So we are excited to finally take the tour.

The legend goes that the ghosts of those killed by Winchester rifles haunted the heir to the Winchester Repeating Arms Company, Sarah Winchester. So she built a massive sprawling mansion to appease them. Today the Winchester Mystery House – and all 160 of its rooms – are California historic landmark number 868.

Sarah Winchester was a very private person and didn’t have many guests in the 38 years the house was being built. But outsiders must have been keen to visit, as the first Winchester Mystery House tours began in 1923, just 6 months after her death.

When we reach the parking lot for the Winchester Mystery House and look up, there’s a mansion that looks like a purpose-built haunted house, turrets and all – juxtaposed against the surrounding freeways with cars speeding by.

Our tour guide explains that we can’t take photos or videos on the tour because a movie, Winchester, starring Helen Mirren as Sarah Winchester is coming out in 2018.

“Oh cool! Is it a ghost movie or just historical?” we ask.

“I believe it’s ghostly but I don’t know a whole lot about it, they did do some of the filming here so maybe you’ll recognise some of the rooms if you see it…” the guide says.

Happily we later find this spooky trailer for Winchester…

The first dark room on the tour is the Carriage Entry Hall – so called because the roof provided shelter for those alighting from or boarding the carriages that once pulled up outside.

“Now if you’ve heard anything about the Winchester Mystery House and its reputation you might be expecting quite a few strange things on this tour and you would be correct,” our tour guide with eyes dark like spiders’ says. “I’m going to give you a little preview of that now. This door right here leads to a very unusual room in the house, so let’s open it up and take a look inside.”

Enthusiastically, he opens the door and exposes a brick wall directly behind it.

“Now I’m not entirely sure why there’s a door that leads to a wall here but there is, and this is just the first of many strange things you will see on our tour today.”

He is right; it is just as bat shit crazy as we’d hoped.

“As we get close to our next stop, look to your right and you’ll see a set of stairs that leads to a very unusual destination…”

When we reach the right spot he gestures to a set of stairs that lead to nowhere, they rise upward to a ceiling. The angle between the top of the stairs and the ceiling makes them jarring to look at.

We arrive at the main carriage room where a video is projected onto a display of stained glass windows.

We learn that 4ft 10inch Sarah Winchester was born in Newhaven, Connecticut in 1839. She married William Winchester at 23, becoming part of the family that would go on to make the Winchester Repeating Rifle. The rifle was incredibly popular and made the family very rich.

But being rich wasn’t much use when Sarah’s only child, Annie, died of a rare childhood disease just weeks after she was born. Or 15 years after that when Sarah’s husband William died of TB at 43.

The legend goes that a heartbroken Sarah sought counsel from a medium in Boston, who told her the spirits of people killed by Winchester rifles were haunting her. Like some sort of cruel joke, the medium persuaded Sarah to move west and start building a house but to never complete it – instead to forever keep adding and adding to it.

Sarah allegedly put in the stairs to the ceiling and doors to nowhere to confuse spirits that wanted to hurt her. The noise of continuous building work was also hoped to drive them away. How drunk or directionally challenged humans avoided falling into these traps is not obvious.

We are told Sarah herself commissioned the stained glass windows with 13 panels and a spider web motif from the Tiffany Glass Co. in New York. She liked the spider web pattern a lot and it can be found dotted around the house. There are also examples of the number 13 in many places.

The Séance Room – communicating with spirits and death’s door

The Séance Room is at the heart of the Winchester Mystery House.

“Sarah Winchester would come to the Séance Room to communicate with the spirits and to get ideas for the construction of this house. Sarah herself was the only person allowed in this room and she had the only key to it,” our guide explains.

“The séance room has one entrance but three exits. The first exit is the entrance. The second exit is the door right next to it there but I don’t recommend you take it because if you do you will immediately drop eight feet and land in a kitchen sink on the first floor below.”

A good thing none of Sarah’s staff were allowed in the room, we think.

“The third exit has no latches of handles, so if someone goes through the door it shuts behind them and they can’t get back in. This is the exit we’ll be taking, who wants to go first?”

One tourist exclaims, “I’ll do it! I’ll take the bullet. Did you bring your sledgehammer?”

On our way out we pass part of the sprinkler system that was installed in the 1940s with pipes that run 7.5 miles throughout the entire home.

The Daisy Bedroom gets its name from its Tiffany Glass daisy windows, imported from Vienna.

“Sarah seems to have been rather fond of daisies and you can see some examples of them throughout the estate,” the guide tells us.

There are pictures showing the front and back of the house at the point it reached its tallest height of 7 floors before the 1906 earthquake.

“Sarah was actually sleeping right here in this room on April 19th 1906 when that very large earthquake hit the California coast at 5.12am – an 8.3 on the richter scale and it was felt all the way from Oregon to LA,” our guide says.

“The chimney was jolted loose, causing the entire wall to shift, jamming the door shut, trapping Sarah in this room. It took her servants quite a while to find her here and once they did it took them quite a while to get her out. Supposedly this mark on the door here is from the crowbar they used to pry it open.” One of the pictures shows the 7th floor tilting haphazardly. “Due to the extensive damage caused by the earthquake, Sarah had the top four floors of the house removed.”

“Now as you might imagine, Sarah was very frightened by this earthquake. Some people say she got a warning from the spirits telling her that she had spent too much time and money on the front side of the house, which was nearing completion at the time. Other people say she was overwhelmed by the extensive amount of damage to that part of the house as well as the significant amount of time and money it would take to repair it all that she decided it just wasn’t worth the effort. But whatever her reasons, she had the front 30 rooms of this house boarded up and they stayed that way until the day that she died.”

The Door to Nowhere

Beside one of the fancy turrets at the Winchester Mystery House is a door to nowhere. “We will not be taking that door, our guide says, “I don’t recommend it.”

We discuss the perils of getting drunk, opening the door and going splat.

When you reach the 4th Floor Balcony you can walk over the creaky wooden floor and peer out over the manicured garden below.

“If you look you can see a crescent shaped hedge. That hedge supposedly had some sort of spiritualistic meaning for Sarah, we don’t know more specifically what but we do know that it just so happens to point towards the room that she died in,” our guide says before pointing to the Bell Tower.

“That bell would ring every day at noon and 5pm to call in the servants for their meals. Some townspeople say they also heard that bell ringing at midnight and 2am, supposedly to call and release the spirits from the séances.” He gestures to a chimney in the room, “this chimney goes all the way up four whole stories just to stop a way from the ceiling, which makes all the fireplaces connected to it completely useless.”

The Grand Ballroom is the most expensive room in the whole house, costing more than three times what a typical house of the day would have.

The room features a chandelier imported from Germany. “When it arrived it had 12 gas lamps, so Sarah had one more added so that there would be 13,” the guide muses. He adds that almost all the ceiling panels have 13 smaller panels in them.

“There are two stained glass windows on the wall – the one on the left says “wide unclasp the tables of their thoughts,” the one on the right says, “these same thoughts people this little world.” They are quotes from unrelated Shakespeare plays. “We don’t know why she chose those two quotes in particular or what meaning they had for her personally.”

“There’s a door right over there that is partially open. Inside that door there was a safe and after Sarah died many people were very eager to find out what was in that safe. Eventually they managed to get it open and inside they found another safe. So you can imagine that just made people more curious, after all, there are many expensive things in this room and none of those things are in that safe. So what could be so important that she would keep it behind two separate safes?

Eventually they managed to get that second safe open and inside – there wasn’t a third safe but it was not empty either – inside there were locks of hair from her husband and daughter and their obituaries. Of all the things that she owned, those were the things that were most precious to her.”

At the end of the tour what resonates the most is just how lonely Sarah Winchester was. The tale is a sad one, of a woman desperate with grief, who was vulnerable enough to believe a medium. Who spent the second half of her life and her fortune on a bizarre mansion designed to protect her from the spirits that haunted her.

The Winchester Mystery House is open every day aside from Christmas Day from 9am – 7pm and tours depart every 15 minutes.

We recommend doing the Explore More tour as aside from anything else, you get to wear hard hats

How to get to the Winchester Mystery House