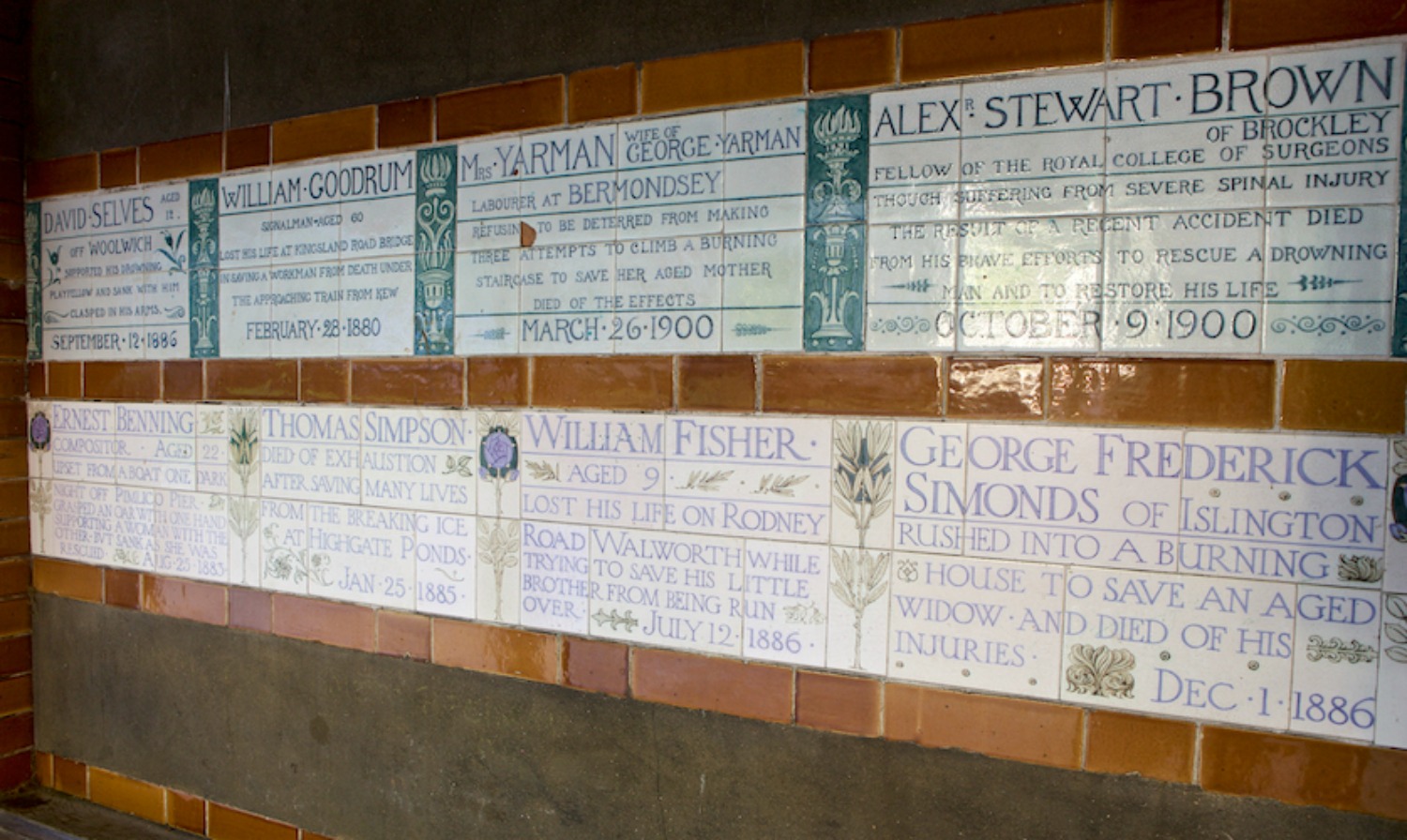 A short walk from the Museum of London and St. Paul’s Cathedral is Postman’s Park, a peaceful patch of green in the City with a memorial dedicated to people who died whilst trying to save others’ lives.

The memorial was proposed by the painter/sculptor and philanthropist George Frederic Watts to mark Queen Victoria’s Golden Jubilee in 1887, but it wasn’t accepted at that time. It was later created when the vicar of St. Botolph without Aldersgate suggested he construct it in Postman’s Park, the church’s former graveyard. The old General Post Office was nearby, and the park was a popular lunchtime spot for its workers, giving it its name.

Despite having space for 120 ceramic plaques there were only 4 on the memorial when it was opened in 1900. George’s wife Mary continued with the project after his death in 1904, but work stopped in 1931. Today there are 54 tiles recounting stories of self-sacrifice, many attempts to save people from fires or drowning, others involving runaway horses, poisoning and quicksand.

The newest tile was added in 2009 to commemorate the print technician Leigh Pitt, who died in 2007 rescuing a child drowning in a canal in Thamesmead. It’s unlikely that any more plaques will be added now as it stands as a piece of history in its own right.

The tiles tell dramatic stories summed up in a sentence; snapshots of horror and panicked decisions. Some teeter uncomfortably on the verge of funny, the very matter-of-fact, early twentieth-century language in stark contrast to the decorative tablets they’re inscribed on.

Railway inspector Frederick Alfred Croft, aged 31, who ‘saved a lunatic woman from suicide at Woolwich Arsenal station but was himself run over by the train’ (1878).

John Cranmer Cambridge, a clerk aged 23, ‘who was drowned near Ostend whilst saving the life of a stranger and a foreigner’ (1901).

Sarah Smith, a ‘pantomime artiste at Prince’s Theatre died of terrible injuries received when attempting in her inflammable dress to extinguish the flames which had enveloped her companion’ (1863).

A spark from a stage light in the Princess’s Theatre on Oxford Street had set fire to dancer Anne Hunt’s dress, and Sarah rushed to help despite wearing the same thing. Anne was badly scarred but did survive.

Others are very touching, the few words recreating last moments in vivid detail.

Mary Rogers, stewardess of the SS Stella, ‘self sacrificed by giving up her life belt and voluntarily going down in the sinking ship’ (1899).

The Stella was shipwrecked whilst travelling from Southampton to Guernsey, killing 105 people. Mary was said to have given up her seat in a lifeboat to another woman, knowing that if she had got in too it would have sank.

David (Daniel) Selves, aged 12, ‘off Woolwich supported his drowning playfellow and sank with him clasped in his arms’ (1886).

Daniel and his friend James Bayne were swimming in Tripcock Point, Thamesmead when James got out of his depth and called for help from Daniel. Both drowned as James held onto Daniel to stay afloat.

Many are young and some are children (nine are listed as 16 or younger), who, like Daniel, lost their lives attempting to save friends or siblings.

Henry James Bristow, aged 8, ‘at Walthamstow… saved his little sister’s life by tearing off her flaming clothes but caught fire himself and died of burns and shock’ (1890).

Henry was looking after his two-year-old sister when she knocked over a paraffin light and set her clothes on fire. He died in hospital six days later.

Solomon Galaman, aged 11, ‘died of injuries after saving his little brother from being run over in Commercial Street. “Mother I saved him but I could not save myself.”‘ (1901).

Solomon pulled his four-year-old brother out of the way of a horse and cart, but fell between the wheels himself and died in hospital a few hours later. The quote to his mother was reported in the East London Advertiser newspaper. In fact many of the tablets are based on newspaper articles reporting on the deaths.

Postman’s Park, St. Martin’s Le-Grand, London EC1A. Open every day from 8am to 7pm or dusk (whichever is earliest). The nearest tube station is St. Paul’s.

Some might recognise the memorial from the film Closer; Alice Ayres is the name Natalie Portman’s character uses after seeing her plaque at Postman’s Park.

There’s also a free mobile app you can use to scan the plaques and find out more about the people commemorated, called The Everyday Heroes of Postman’s Park (it was a bit glitchy when we tried it off-site but it has some good background info).