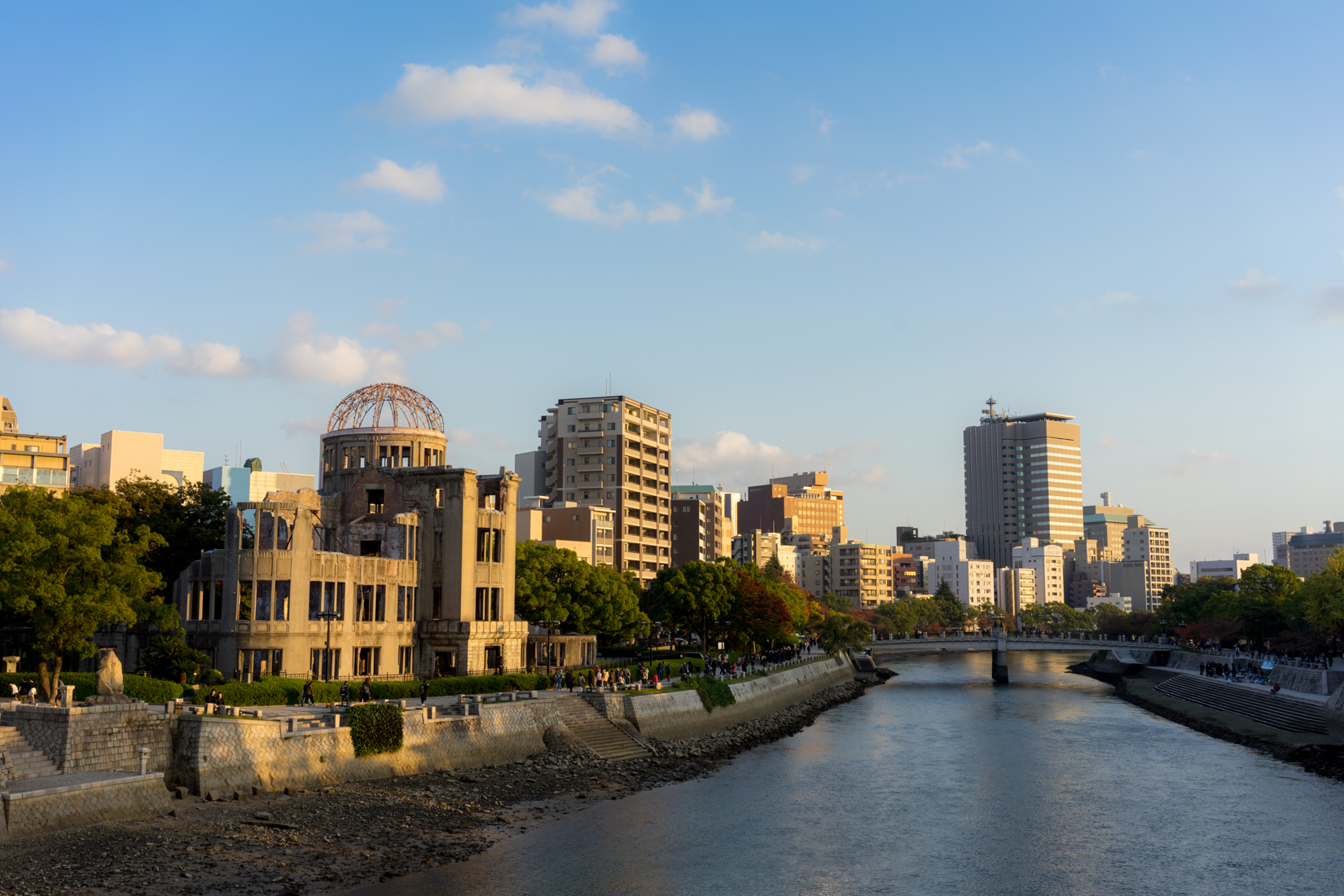 The ‘Little Boy’ atomic bomb was dropped on Hiroshima at 8.15 am on the 6th August 1945. Around 70,000 people were killed instantly as it exploded 600 metres above the ground, the heat from it so intense that it’s said people simply disappeared. The final death toll was double that as many suffered slowly from burns and radiation poisoning for years afterwards.

The Hiroshima Peace Memorial Park was created in remembrance of the victims of the bomb, and to show the horrors of nuclear war. The Atomic Bomb Dome inside the park is one of the most infamous sights of the Second World War – the bomb landed directly above this exhibition hall which absorbed the explosion and burst into flames leaving only its shell behind. Overall it destroyed five square miles of the city.

The Hiroshima Peace Memorial Museum contains drawings and oral history videos of survivors, many who remember seeing a brilliant flash of light and the thundering sound that followed. There’s also a horrifying collection of clothes and possessions belonging to people who died.

There’s barely any information about Japan’s part in the war – Pearl Harbor and the Nanking Massacre are glossed over. Instead it says that the US dropped the bomb to justify the cost of making it to Americans. This really surprised us and made it difficult to completely engage with the museum. By denying any wrongdoing by Japanese forces the museum is prevented from being able to ask deeper questions about whether the bomb was justifiable or not as a means to end the war.

For a memorial that claims to advocate world peace it seems very strange that it’s so selective with the facts, and it feels that this does the victims of Hiroshima and Nagasaki themselves an injustice.

The park is packed full of reams of school kids (each class with different coloured hats on) visiting the museum and singing songs around the Children’s Peace Monument.

The monument has a statue of Sadako Sasaki with a crane on the top – she was two years old when the bomb was dropped, and was blown out of a window (but unharmed) by the blast at her home a mile away. Her mother ran to a nearby river with her and her older brother, through the black rain, past the burning streets and bodies. At first it seemed that Sadako was okay, but she died when she was just twelve from leukemia caused by radiation poisoning.

When she found out she was ill Sadako started folding paper cranes – in traditional Japanese belief folding a thousand cranes grants the person a wish. People still tie these outside the monument today.

The park is open 24/7. The museum is open from 8.30am-6pm (March to July and Sep to Nov; open until 7pm in August and 5pm December-February). Admission is ¥200 for adults (about £1.50), ¥100 for students and free for children. The main museum building is currently being renovated, but most of the exhibits are still on display.