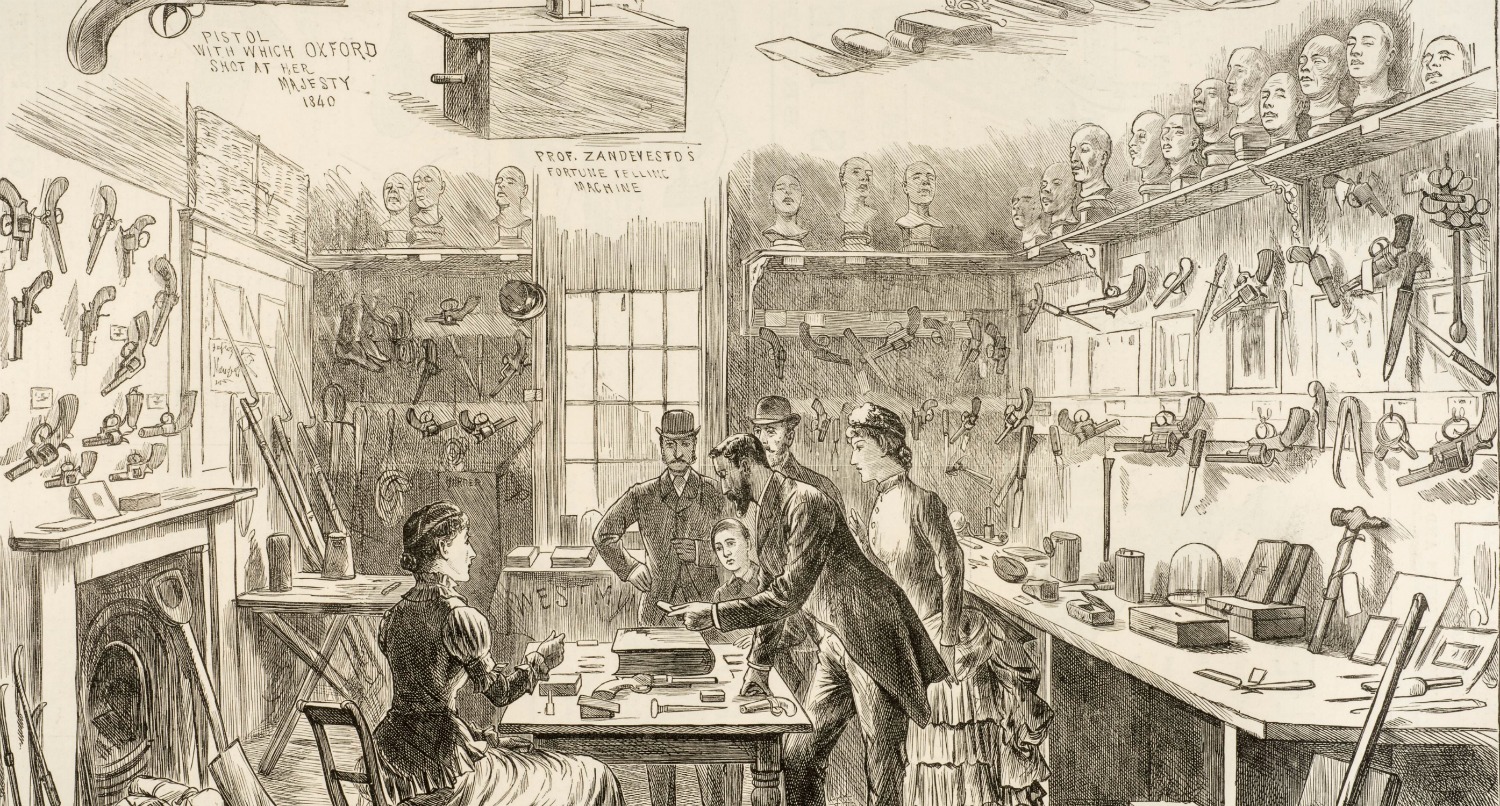 Neatly lined up death masks, a row of nooses and glass cabinets filled with every imaginable murder weapon (and more) are all on show at ‘The Crime Museum Uncovered’ exhibition at the Museum of London. The objects are taken from Scotland Yard’s Crime Museum (or ‘Black Museum’), created in the 1870s to help train police officers in the techniques of criminals and the methods used in the past to catch them.

The Museum of London have carefully curated the exhibition, keen to stress that the collection reflects changes in detective and forensic work, and isn’t just about tapping into people’s morbid fascination with murder and death. Either way it’s been a hit thanks to the infamous crimes some of the objects relate to.

The first bit of the exhibition showcases some of the oldest parts of the Crime Museum collection, including Jack the Ripper-associated artefacts. The second part looks at 24 specific cases in detail, with booth-style sections about the victims, the crimes and their detection. These cases only go up to 1975 due to the obvious issues involved in displaying the details of more modern brutal murders. There is a final section on terrorism though, including very disturbing reconstructions of the backpacks of the 7/7 London bombers.

There’s a lot to read, and after five or so booths we could feel ourselves becoming a bit numb to the information, much of which involves the murder of women and the sensationalist media reports of these cases.

One of the most horrible bits of the exhibition is a selection of DIY weapons, including a pair of binoculars a man reportedly sent to an ex. When the binoculars are put into focus long, sharp spikes shoot out into your eyes.

There are also a few cases of women on the wrong side of the law, including Ruth Ellis, who you can’t help but feel sorry for, and the ‘Finchley baby farmers’, who provoke the opposite reaction.

Whether or not the exhibition succeeds in making you think about the victims as much as the perpetrators of the crimes is debatable. Drawing on Scotland Yard’s collection means there’s a heavy focus on the objects used by or associated with the criminals, which leads to a sense of detachment from the actual people involved in many cases.

But as a visitor of the collection you’re in good company – special guests could access Scotland Yard’s Crime Museum too, and the exhibition has an electronic version of its old visitors’ book that you can swipe through, with Arthur Conan Doyle, Houdini, and Laurel and Hardy all listed on it. Above all The Crime Museum Uncovered is testament to the enduring appeal of the macabre, and our centuries-old desire to get up close and personal with it.

The Crime Museum Uncovered runs until 10th April 2016. The Museum of London is open from 10am-6pm every day, and there are a few late-night weekend openings of the crime exhibition coming up. Prices range from £10-£14 per adult (cheapest on Wednesdays).

Barbican and St. Paul’s are the nearest tube stations.