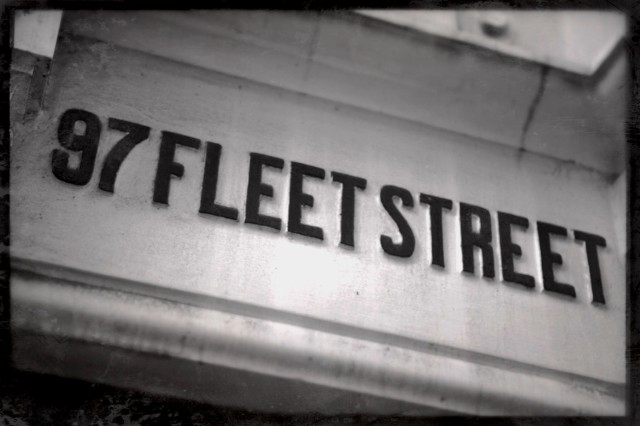 It’s eighteenth-century London and the men who enter Sweeney Todd’s barber shop on Fleet Street mysteriously disappear, never to be seen again. Meanwhile, at Mrs. Lovett’s baker shop around the corner, business is booming as her new pies are flying off the shelves. Little do the unsuspecting customers realise the tender meat is in fact human flesh, sourced from Todd’s customers – who got more than they bargained for at the barbers…

The story of Sweeney Todd, the maniac throat-slitting barber whose victims are turned into delicious pies, first appeared in print between 1846 and 1847 in the ‘penny dreadful’ The String of Pearls: A Romance. Penny dreadfuls were cheap, throw-away stories (usually loosely based on real crimes and murders) hugely popular with the Victorians, who had a taste for semi-fictionalised accounts of the most fearful and debased things that might be happening a few streets away (a bit like the scaremongering Daily Mail today).

After its penny dreadful debut Sweeney took off, and has been adapted many times for books and plays. In 1973 the playwright Christopher Bond introduced revenge into the story – instead of being simply deranged (although he’s definitely still pretty mad), Todd is driven to murder by the evil Judge Turpin, who has stolen his wife, unjustly arrested him, and sent him off to Australia for fifteen years. This is the plot used in Tim Burton’s Sweeney Todd film from 2007 too.

Although penny dreadfuls drew inspiration from real life, there’s no evidence Sweeney Todd actually existed. You can search the records of the Old Bailey, where felonies were tried, but there’s no trace of Todd. It’s possible the penny dreadful authors drew inspiration from contemporary accounts of murder and cannibalism (including a very similar but unproven case involving a Parisian barber).

The free Sweeney Todd Audiowalk was created to promote the release of the Tim Burton film, and includes audio clips, music (Cockney Johnny Depp) and interviews with the cast. It lasts about an hour, and takes you around Fleet Street and its winding back alleys.

The tour starts at Temple tube station, looking out to the once-putrid River Thames. Apparently the smell was so bad that one summer the curtains in parliament had to be soaked in vinegar so the government could focus on their work. The thick, dark London fogs (known as ‘pea soupers’) would have blighted the city’s streets.

Moving up through Milford Lane to the Strand (with the sound of footsteps and sometimes songs to accompany you), the narrator points out the griffin at Temple Bar; the historic boundary between the cities of London and Westminster. Here once stood Christopher Wren’s arch, where the heads of traitors were displayed on spikes on the roof. The original arch can still be seen, now in Paternoster Square near St. Paul’s Cathedral.

Next stop is Mrs. Lovett’s pie shop in Bell Yard.

In the original story, the pie shop was connected to Todd’s barber shop via an underground tunnel, meaning the bodies could be easily transported from one to the other. The bits which couldn’t be used as pie filling – including the skin and bones – were hidden in the catacombs of St. Dunstan’s Church. In fact this is what eventually gives Sweeney Todd and Mrs. Lovett away; when churchgoers started to complain about the stench during services, the piles of rotting corpses are discovered.

Next door to St. Dunstan’s is the reputed site of Sweeney Todd’s barber shop: 186 Fleet Street. The sign outside is said to have read ‘easy shaving for a penny, as good as you will find any’. Here Todd would have set his victims up in the barber’s chair then pulled a lever to send them flying down into the basement, where they would break their necks upon impact with the ground. If not, Todd kindly finished them off afterwards by slashing their necks (there’s lots more cinematic chair-based throat-slitting by Johnny Depp).

As well as the key sites in the Sweeney Todd tale, the audiowalk also reveals some other interesting snippets of London history. There are stop-offs at Dr. Johnson’s House, St. Bride’s Church (which also has an interesting crypt) and Ye Olde Cheshire Cheese pub, one of the first buildings completed after the Great Fire, popular with Charles Dickens and Oscar Wilde among others (‘perhaps Sweeney Todd would have drank here…’) and boasting pies weighing up to eighty pounds. Or, in Todd and Mrs. Lovett’s measurements, around half an average man.

Weekends are the best time to do the walk, as it’s quiet in the City. Make sure your listening device is charged and off you go!

Thanks to Simon Montgomery for the pictures.

The Plague Pits of London