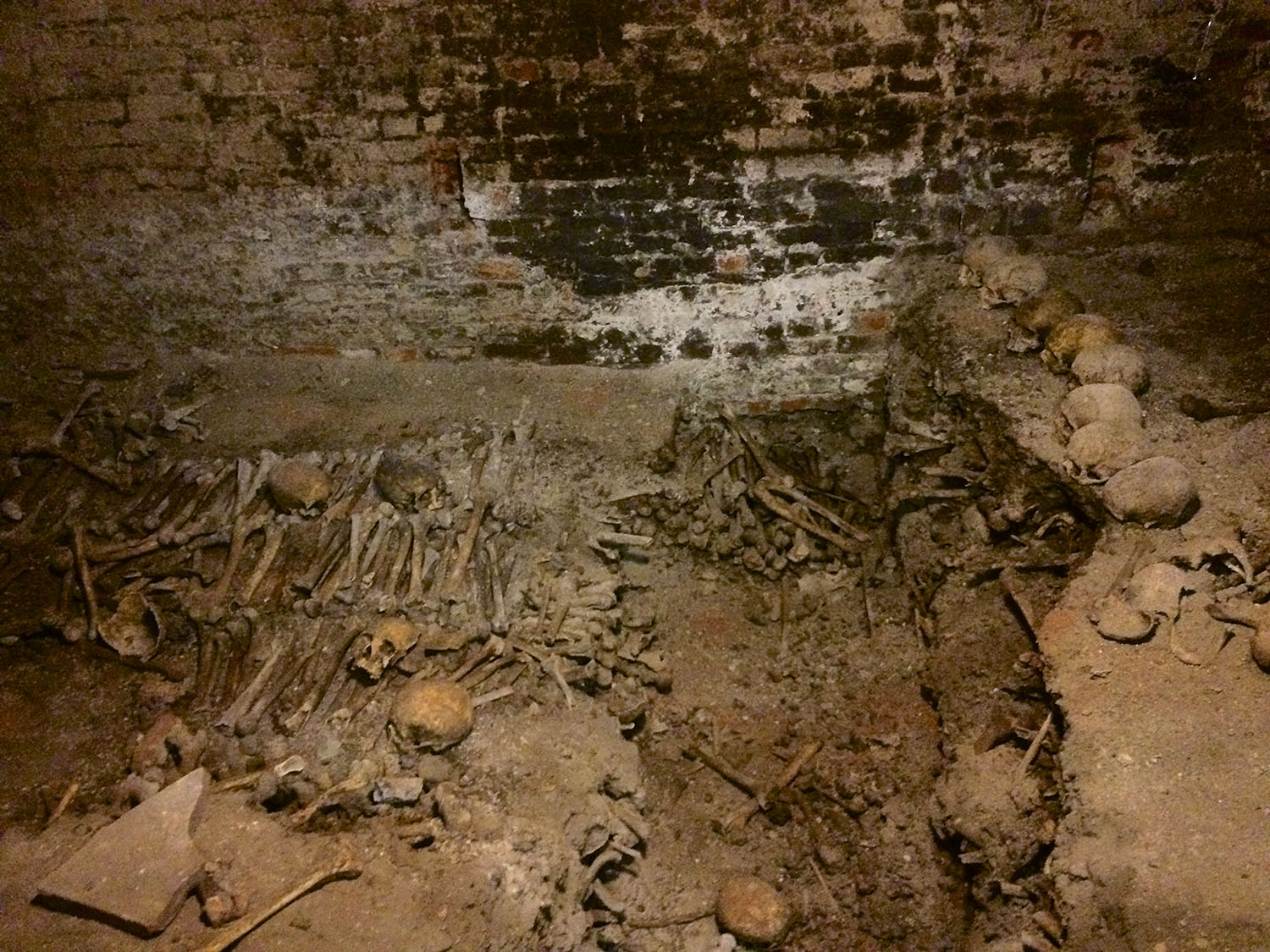 Tucked away on a side road off from the weekday chaos of Fleet Street is St. Bride’s Church, a Christopher Wren design finished in 1703. Outside are a few City workers quietly eating sandwiches on benches next to the gravestones. We didn’t know about the church until it got a mention on the Sweeney Todd Audiowalk tour – its spire the inspiration for the first tiered wedding cake.

Travel Darkly, along with a group of journalism students from the University of South Carolina, joined a Tuesday afternoon tour led by one of the church’s vicars.

St. Bride’s location on Fleet Street gives it a strong connection to the printing industry; it’s also known as the Journalists’ Church and one of the earliest printing presses was brought there in 1500. In the church’s north east corner there’s a hostage altar, where vigils were originally held for John McCarthy who was kidnapped and held in Beirut between 1986 and 1991. It’s now a memorial for all the journalists who have died whilst reporting in war zones. Marie Colvin, American journalist for The Sunday Times, read at St. Bride’s 2010 memorial for the press in the Iraq conflict, and was killed whilst reporting in Syria just over a year later.

St. Bride’s was heavily bombed during the Blitz, and as a result the church floor was destroyed revealing the crypt beneath it for the first time in a hundred years. Downstairs there’s an exhibition about the excavation of the site, a Roman pavement, a medieval chapel (now a journalist memorial space) and a 19th-century iron coffin, created to deter body snatchers.

The tour takes you through a locked door in the exhibition room, past corridors of church paraphernalia (including Christmas CDs with ‘DO NOT TAKE’ stuck to them), and a sink with a kettle and a packet of opened biscuits.

When the crypt was excavated in 1953 thousands of human remains were found – many from victims of the 1665 Great Plague and the 1854 cholera epidemic. People wanted to be buried close to the centre of the church as it was reputedly their best bet to get into heaven, and the rich were willing to pay handsomely for this (Samuel Pepys was baptised here and had his brother Tom buried in the church in 1664, when it was already so overcrowded that he had to bribe the grave digger to make room). The churches were more than happy to take their money and re-inter the older corpses by chucking out their bulky coffins and piling their bones up in the charnel house. By 1854 the situation was so bad the crypt had to be sealed off amid fears that the dead bodies would continue to spread cholera.

The ossuary now contains stacked up boxes of bones, and you can even peep in the charnel house where the remains are still arranged in the collections they were originally left in.

Some people don’t want to look. One member of our tour is very interested in what happened to the coffins after they were chucked out; where did they go, were they used as firewood, how many were there? ‘I’m not really sure’, replies our guide, bemused at this special interest in coffins.

But the bones have become one of Europe’s most important scientific resources of skeletons – a fortunate discovery during one of London’s most devastating periods of history.

Tours around the church and crypt cost £6 per person, and are held every Tuesday from 2.15pm. You could combine it with the Sweeney Todd Audiowalk on Fleet Street – just pause it before the tour and resume once you’re out!

The closest tube stations are Blackfriars and St. Paul’s.