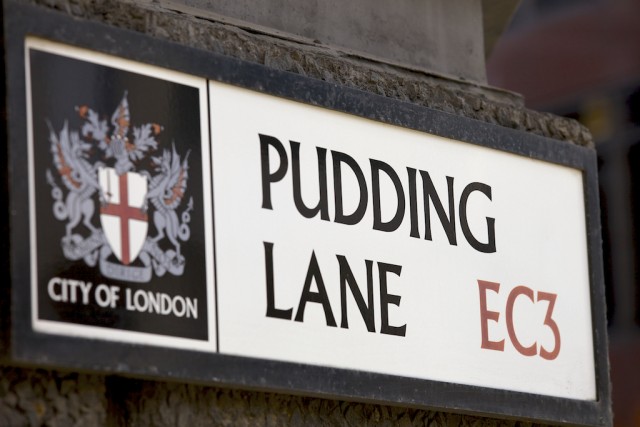 Londoners weren’t having much luck in the 1660s. Religious tensions were high after the English Civil Wars and the Restoration. England was at war with France and the Netherlands, and in 1665 the Great Plague had killed about 15% of the city’s population. But more Great stuff was to come. The following year in 1666, a small fire which started in a London bakery at night went on to wipe out 85% of the City of London in 5 days, including 87 churches and 13,200 houses – the worst city fire ever recorded. The Great Fire of London was to dramatically change the landscape of the city forever.

London’s burning… how did it happen?

London wouldn’t have ranked well in a fire risk assessment. 1666 had been a long, dry summer. Narrow streets were rammed with wooden houses, many with overhanging upper levels. Fires were common, as were prophecies of infernos sweeping through the city. All that was needed to start the destruction was a single misplaced spark, provided by Thomas Farynor, a baker on Pudding Lane.

Pudding Lane (‘pudding’ being a medieval term for entrails and haggis-type puddings rather than banoffee pie) was the perfect spot for a fire to start. Warehouses in the area stored a selection of unfortunately flammable goods, including oil, timber and alcohol. When Thomas went to bed, the bakery oven was probably not fully extinguished. A stray spark most likely fell on a pile of spare fuel, setting the chaos into motion.

At 2am on Sunday 2nd September 1666, Thomas and his family escaped from the smoking house across the rooftops. The family’s maid was too frightened to follow and became the fire’s first victim (thankfully the death rate is thought to be relatively low – under 10 people – although this may be an underestimate). A plaque on the wall of ‘Faryners House’ on Pudding Lane marks the start of the fire.

As the flames spread down the narrow alleys towards the Thames, the Lord Mayor, Thomas Bloodworth, was woken at 3am to assess the situation. He famously declared that ‘a woman might piss it out’ before going back to bed.

Unfortunately (depending on the size of the woman) this remark was slightly misjudged. St. Michael’s Alley today gives a good idea of how narrow seventeenth-century London streets would have been, and how quickly timber buildings would have been set alight.

By dawn London Bridge was on fire, although a break in the buildings on the bridge contained it, protecting Southwark. A strong easterly wind was fanning the flames, making it almost impossible to contain. There was no fire brigade so people tried to douse it out themselves, before heading to the Thames to make their escape in boats.

Samuel Pepys recalled seeing the pigeons hovering on windows and balconies before their wings burnt and they fell down. King Charles II ordered Bloodworth to start pulling down houses with fire hooks, but by Sunday afternoon things were already out of control.

By Monday the fire had spread further north and west, and the smoke could been seen from Oxford. More and more people were packing their belongings in carts and attempting to flee the city. By Tuesday Samuel Pepys was burying his wine and Parmesan in the garden. Gunpowder was being used to demolish burnt houses.

The fire destroyed the Old Bailey and both Newgate and Ludgate prisons, reaching the old St. Paul’s Cathedral at 8pm on Tuesday, which was covered in wooden scaffolding at the time. Everyone assumed the stone cathedral would be safe – booksellers even put their goods in the crypt to protect them – but the flames travelled up the scaffolding to the roof, eventually gutting the inside. Christopher Wren designed the new St. Paul’s Cathedral in 1669, which is actually smaller than the one that went before it.

By Wednesday the wind had changed direction and the fire was under more control. By the time it had been mostly extinguished on Thursday it had destroyed over 300 acres of London.

‘The Golden Boy of Pye Corner’, on the corner of Giltspur Street and Cock Lane in Smithfield, marks where the fire was finally stopped. The chubby golden boy represents gluttony, thought by some to have been responsible for the disaster – the fire’s beginning in Pudding Lane and ending at Pye Corner a sign of God’s wrath.

Over-indulgence in puddings wasn’t the only thing blamed. Suspicions turned on the Dutch, French and Catholics in general, and the Frenchman Robert Hubert in particular, who ‘confessed’ to starting the fire and was hanged at Tyburn at the end of the month. It later transpired that Robert hadn’t arrived in London until two days after the fire started.

Baker Thomas Farynor wasn’t too keen to admit it might have been his oven’s fault, either.

London was slowly rebuilt along the old city street plans, with brick or stones houses this time round. Many of the thousands of homeless Londoners never returned. The 202 ft tall Monument at the junction of Monument Street and Fish Street Hill (which you can go up; in fact 6 people committed suicide from it in the eighteenth and nineteenth centuries, hence the iron cage at the top) was built in the 1670s to commemorate the fire. If laid horizontally its tip would touch the point where the fire started. An inscription on the Monument blamed the Catholics for the fire right up until its removal in 1831, stating it was ‘begun and carried on by the treachery and malice of the Popish faction’.

Big thanks to Simon Montgomery for taking the pictures for this post, and Rob for his acting abilities.