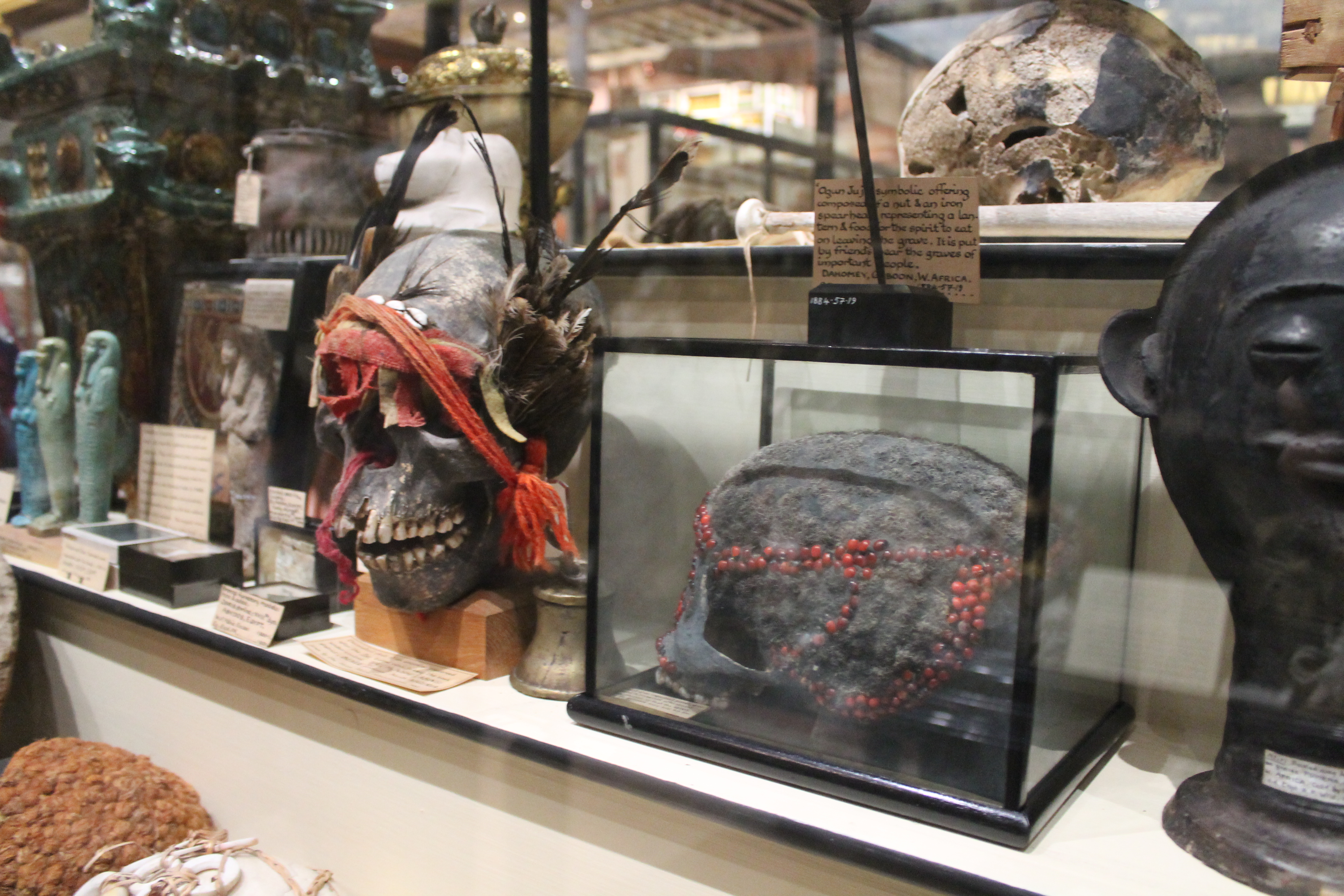 It’s not every day someone surprises you with a human heart in a heart-shaped case. So when Helen Adams, a curator at the Pitt Rivers Museum in Oxford, showed us one just before Valentine’s Day, our own cold, dead hearts melted a little.

The Pitt Rivers Museum has one of the most eclectic collections we’ve seen in a museum; well, anywhere to be honest. The leaden heart-shaped case is displayed lying flat on a shelf and closed on the first floor of the museum. But thankfully much of the Pitt Rivers collection has been lovingly photographed and put online so you can see what the shrivelled heart inside looks like. We spoke to Helen Adams, curator.

HA: This one is special because it was collected by Pitt Rivers himself. A lot of people think everything in here was collected by him, but actually only a small fraction of our collection was. Heart burials were popular in Europe for a time, and this one was collected from the crypt of Christ Church in Cork when Pitt Rivers was stationed there as a soldier.

TD: I guess now we’d be more likely to bury our brains.

HA: Ha, now we know more about anatomy, probably yes… Heart burials are interesting because the heart was where the soul was believed to be. So the body could be discarded and the heart removed and buried separately in a place that meant something to the person it belonged to. Sometimes, in the case of lovers who died apart, their hearts were brought together and buried in the same place after their deaths.

HA: In fact, even Richard the Lionheart’s heart was buried in Rouen Cathedral next to his brother’s, in line with his wishes after his death in France. I’d like to show you some things upstairs too.

Helen closes the first floor while we head upstairs. She takes us past the funerary posts of the Tiwi people from Melville in Australia toward a cabinet marked ‘DEATH.’

HA: So this display is all about bodily modification, and it goes from temporary, to tattoos, to the modification of bones – as in the case of foot-binding and skull elongation – to the modification of the dead. Here you can see the hair of a dead Victorian child that has been sent off to be boiled and then taken to a jewellers to be spun into a necklace and matching earrings.

TD: Yuck. The Victorians were weird. At Bristol Museum and Art Gallery they’re putting together a death exhibition – one of the pieces is a necklace made from the jawbone of a man that would’ve been worn by his widow.

HA: Really? I’ve not seen those.

TD: Yes. Dead husband’s jaw round the neck… where do we sign up?

Helen closes up the top section of the museum and we return to the first floor, where the shrunken heads, skulls and amulets are displayed.

TD: We need to talk about shrunken heads.

HA: One of our previous staff members, Francis Larson has actually explored this in her book, severed heads

– a lot of her interest came from her time spent here. The shrunken heads were taken from enemies and the bones removed before stones were placed inside to give them shape, then the mouths were sewn up to prevent the soul of the person escaping. When the tribe returned to the village a ceremony was performed and the power of that soul was taken to provide strength to the community. Once that ceremony had taken place the head became an empty vessel, which is why they were sold on to collectors. Heads were traditionally meant to be strung up from a cord so it may be the case that those without cords were made for trade.

HA: Possibly, I don’t know. I do know that people call that one Bernie Ecclestone though.

TD: And do the communities they were taken from still exist?

HA: Deforestation and Westernisation has meant many of the tribes either no longer exist or where they do they no longer have cultural practices like this.

TD: When did shrunken heads disappear?

We talk a bit about the taking of heads by different groups of people and tell Helen an American friend whose grandfather fought in the Vietnam War had kept a Vietnamese person’s scalp, which had been shocking to hear. Helen points out a case with a german helmet with horns protruding from the sides.

HA: The British Empire was vast, and many people fighting on behalf of the British in the First World War were from countries within the Empire. It was a practice of the Naga people of northeast India to take the heads of enemies as trophies, but they were told not to take the heads of Germans – so they took their helmets and decorated those instead.

Next we move to where the amulets are displayed. It’s funny that when you visit a museum without reading about it first, or being guided through, you notice completely different things than those a curator can show you. We were aware of the silver moons from Italy and the Sicilian tarot cards, but Helen pointed out things we’d never noticed before.

HA: This is the witch in a bottle.

TD: Witch in a bottle?

HA: Yes, the kids love that one. There is actually something small and shrivelled inside and it’s said that if you were to open it the evil would be released.

HA: Ha, indeed… and this, this is a slug on a thorn that’s from Oxfordshire, we have a few of these. If someone had a wart they’d get a slug and rub the slug on the wart before putting the slug onto a thorn. The length of time the slug took to die would be the length of time it would take for the wart to drop off. This slug used to be black but has been bleached white after a century in alcohol – so it wasn’t only albino slugs that cured warts.

Before our tour is over, Helen shows us the skeleton of a bear with a headdress on, and points out that the bear is holding chopsticks, which the Ainu people of Japan believed would help it eat in the afterlife. Our final stop is beneath a Ghanian fantasy coffin.

HA: We commissioned the fantasy coffin from Ghana for a special exhibition – it was made for a shopkeeper and all the images are brands that he might have sold in his shop, and the top is supposed to look like the corrugated roof of the shop.

How to get to the Pitt Rivers Museum, Oxford

From Oxford train station or Gloucester Green bus station, walk to the centre and past the White Horse Pub and the Museum of the History of Science (well worth a visit if only for all the magical astrolabes) on Broad Street, turn left at the end of the road and keep going until you see the museum on your right.