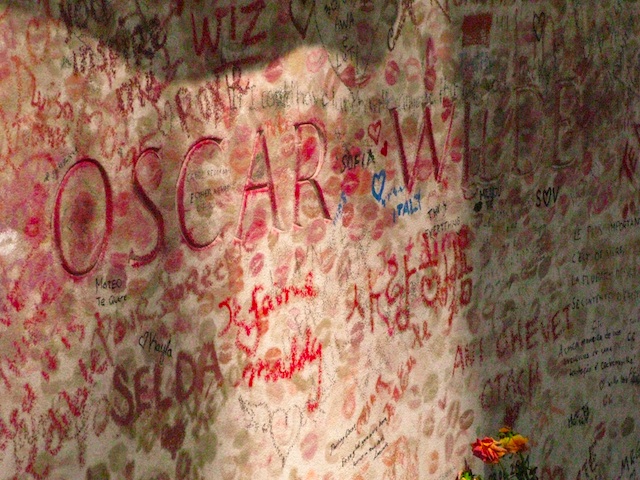 As with many a large city necropolis, Père Lachaise Cemetery is a free oasis of peace. And sometimes respite from the people-filled Eiffel Tower and Notre Dame can be a good thing. Plus there are a number of famous and interesting people buried on the hills of this city of the dead. You can amble past them on a sunny afternoon stroll (or rainy, if it suits your mood better).

Oscar Wilde. Born: October 16th 1854, Died: November 30th 1900 of cerebral meningitis. A popular playwright famous for plays such as The Importance of Being Earnest, and for the poem the Ballad of Reading Gaol (where he spent some time) as well as his wit.

Molière is buried next to Jean de La Fontaine, Born: July 8th 1621, Died: April 13th 1695 of natural causes. Famous for his fables, which are often published as collections of fables, as Aesop’s Fables are. La Fontaine was also famous for his poetry.

Jim Morrison, Born James Douglas Morrison, December 8th 1943, Died: July 3rd 1971. Found dead of a heart attack in a bathtub, according to official reports, but rumoured to have died of a heroin overdose, or according to some rumours, not to have died at all. Frontman of the band The Doors, whose songs included The End, People are Strange and The Unknown Soldier.

How to get to Pere-Lachaise