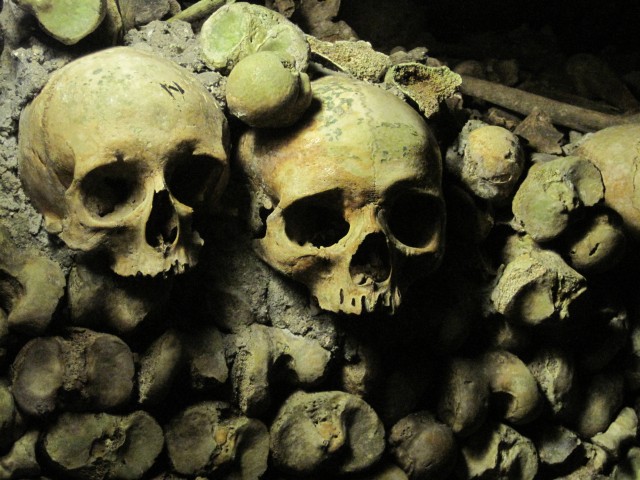 The Paris Catacombs are housed in what were once ancient quarries beneath the streets of Paris. We went to take a look…

First thing’s first: there are exceedingly long queues to get into the catacombs without careful planning.

“To avoid joining the deceased by the time you’ve reached the end of the line, turn up early.”

From about 9.30am onwards, if you’re standing in a relatively short line, you’ll be able to watch as a thousand people pool in behind you as if from nowhere. You’ll feel smug for having got there early. This is because visitors numbers on the 2.4km underground trail are restricted to 200 at any one time.

Also note that there are 130 steps down to the catacombs and 83 back to street level. The 45 minute walk is unsuitable for people with heart or respiratory problems and ‘those of a nervous disposition.’ Claustrophobics may also have a tough time. The temperature down below is a constant 14˚C.

At the beginning of the walk through the catacombs you’ll see a display about the geology of the level of the earth at which you stand. It dates to the Lutetian period, 48 – 40 million years ago, discovered in the city and named after the ancient name for Paris, ‘Lutea.’ Lutetian limestone is ace for building stuff with and is commonly known as ‘Paris stone.’

Paris stone was quarried in open quarries from the beginning of the Roman colonisation, and it supplied the Arenes de Lutece and the Thermes de Cluny. Extraction of the stone went underground during the Middle Ages.

“Notre Dame Cathedral and all the Gothic monuments in Paris were built using Paris stone quarried from beneath the city.”

Underground quarrying went beneath the southern suburbs of Paris through the nineteenth and into the twentieth century. The circuit of the catacombs you will walk follows one of the underground quarries from the late middle ages.

In the mid eighteenth century the neglected quarries were falling apart, unbeknownst to the citizens of Paris until some of them caved in.

“The old underground quarry tunnels were forgotten about until some of them caved in in the mid eighteenth century. The citizens of Paris (understandably) panicked.”

A government department – Inspection Generale des carrieres de Paris (IGC) – was set up by King Louis XVI on 4th April 1777 to assess underground risks and strengthen tunnelled spaces beneath the city. The IGC aimed to ensure the safety of the people and properties of Paris. Investigatory tunnels were dug under the streets. Some were filled in, others were reinforced.

The creation of the Paris Municipal Ossuary – the catacombs

Before the catacombs existed, the Cimetiere des Innocents (Cemetery of the Innocents), in what is now Les Halles, had held the remains of the majority of deceased Parisians since the Middle Ages. At the beginning of the eighteenth century, the overflowing charnel houses (buildings and vaults where skeletons are stored) posed a health risk to those in the immediately surrounding area. On 9th November 1785, much to the Parisian’s dismay, they were closed by the King’s State Council.

“The Paris authorities had an epiphany: turn the abandoned quarries beneath the city into space for the remains of its dead from the over-full cemeteries – create an ossuary.”

Up until that point an ossuary had been located outside the capital at la Tombe-Issoire, under the Montrouge plain. Now, the quarries were speedily strengthened and the catacombs were consecrated 7th April 1786. Other bones from floundering cemeteries were transferred until January 1788, then again between 1842 and 1860.

“Although the Paris Catacombs are the largest in the world (there are more than 6 million skeletons interred here) they cover no more than 1/800th of the area of the underground quarries of Paris.”

Underground tourism of the ossuary was abandoned during the French Revolution (1789) but reorganised in 1809 by a man with a very long name, Louis-Etienne-Francois Hericart de Thury, to allow visits. The bones were arranged to form walls, columns, altars, and fountains, and adorned with engraved plaques.

“Today, as you walk through, the overwhelming effect is that of some kind of modern art installation-meets urban exploration site. A must see in Paris.”

The catacombs are open Tuesday to Sunday 10am – 5pm. Arrive before 9.30am if you want to queue for an hour or less and be out in time for lunch. Last admission is at 4pm, but 1pm is the latest we’d recommend you arrive, to allow for the length of the queue at that time of day.  There are no toilet facilities inside the catacombs, so get a tag team ready for the queue if you want toilet breaks. Booking is a must for large groups, the number to call to make bookings is +33 (0) 1 44 59 58 31.

The catacombs are located at place Denfert-Rochereau, previously known as place d’Enfer (Hell Square). This is the name of the Metro stop. The entrance is at 1 Avenue du Colonel Henri Rol-Tanguy, 75014 Paris, France.