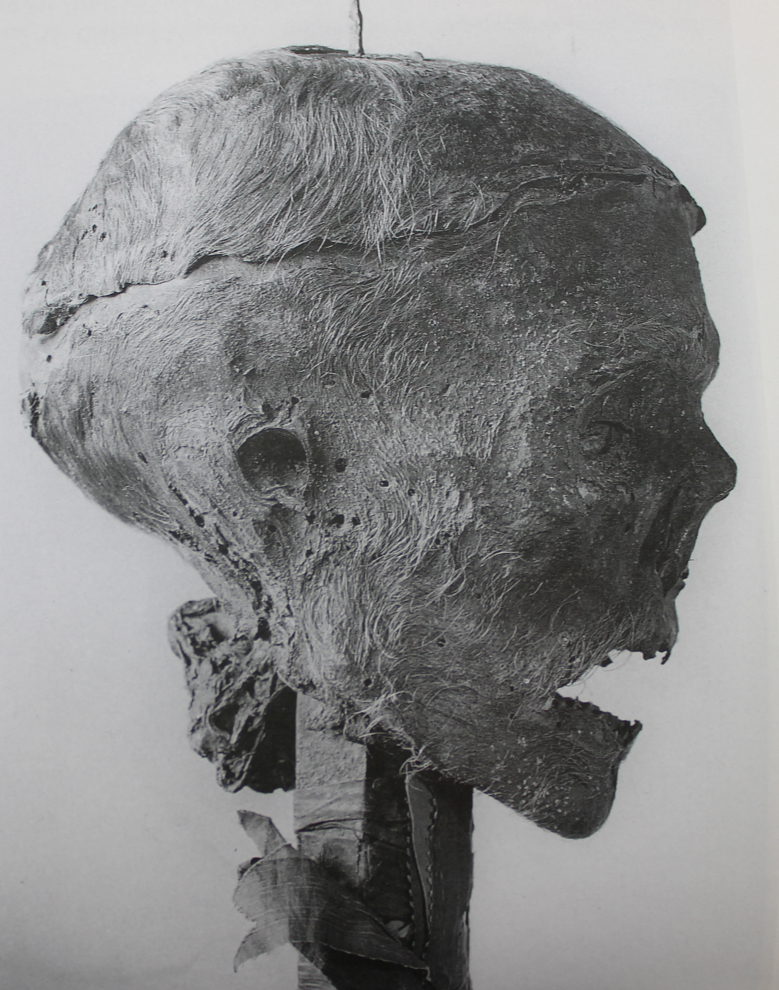 Cromwell's head before it was buried at the chapel in Sidney Sussex College, with thanks to the college

In the seventeenth century England was a Protestant country. It was ruled by King Charles I between 1625 and 1649 (when his head was chopped off). Charles I brought in all sorts of church reforms which seemed a bit too Roman Catholic for people like Oliver Cromwell.

Cromwell was a Puritan who had converted in his late twenties. He went to a iiammar school – where the Cromwell Museum that needs saving is now  – and later to Sidney Sussex College, Cambridge – where his head is buried in a secret location.

Cromwell hated authority and powerful churchmen like the Bishop of Ely. He defended the rights of fenmen in Ely – who depended on the surrounding wetlands to make a living – against those who wanted to drain their land without compensating them. This earned him the title ‘Lord of the Fens.’ Following this, he was elected Member of Parliament for Cambridge. He would later raise armies to fight against King Charles I in the English Civil Wars. These broke out when Parliament could no longer stand the changes Charles I was making to the church, or his insistence on running the country without having to consult them.

On one side was King Charles I and his supporters, on the other, men like Oliver Cromwell who thought the King was an oppressor. War spread to Scotland, Ireland and Wales and lasted nearly nine years.

Charles I and his supporters believed God put him on the throne, by Divine Right, but Oliver Cromwell believed he was chosen by God to stop Charles I – a bit like Joan of Arc and John Falstof in the Hundred Years War (beautifully portrayed in the Simpsons when Lisa is Joan of Arc, leader of the French army and Groundskeeper Willie is John Fastolf, leader of the English army.  They have a quarrel about how both have been chosen by God to fight the other, and God says, ‘well I never thought you two would be in the same room’).

When Charles I with his supporters, and Parliament with their supporters, came to a head in 1642, private armies were raised up by both sides to fight against one another at battles across the UK. Parliament’s armies were lead by Sir Thomas Fairfax and Oliver Cromwell. Cromwell realised after much fighting that in order to win all the battles, he needed to create a national army. He called the newly united forces the New Model Army, and they thrashed Charles I’s forces at the battle of Naseby in 1646. Charles I never recovered.

After his army had been destroyed Charles I was captured, but he refused to negotiate. Parliament’s anger at him grew; he escaped and ran away to make a deal with the Scottish, who provided him with an army to invade England. It was quickly defeated and the English paid the Scottish £400,000 for the handover of the King, who was then put on trial for treason. Parliament were desperate to get rid of him, and made up their own laws to do so.

Charles I was found guilty of treason, with 59 Commissioners (or judges) signing his death warrant (including Cromwell, number three on the warrant). He was beheaded from a scaffold at the Banqueting House in London on 30th January, 1649.

England was now a Commonwealth, ruled by Parliament sans monarch. What was left of the pre-Civil War Parliament ran the country for four years until Cromwell dismissed them. Eventually when nothing was working power was signed over to him and he became Lord Protector of the UK and head of state (having refused the crown). Under Cromwell England was a Puritan country where basically no fun was allowed at all. Puritans believed that to get into heaven you had to work hard. Time spent on frivolous activities like drinking in pubs, going to the theatre or playing football, were banned. Going for a walk to anywhere but church on a Sunday could lead to a rather hefty fine. Women wearing make up would have it scrubbed off them in the streets. 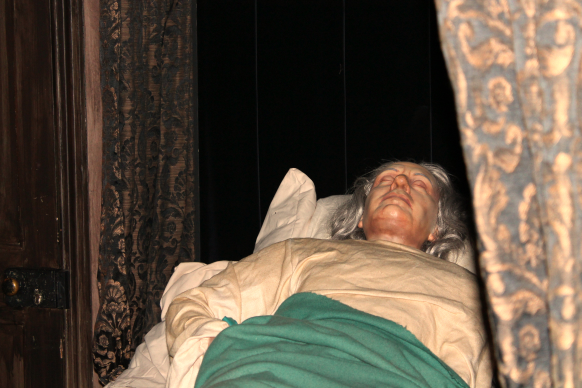 The Cromwell family moved to London where they lived for twelve years before Oliver got sick following the death of his favourite daughter, Elizabeth Claypole. Cromwell is likely to have suffered from malaria as well as other ailments. He died on 3 September 1658 aged 59 and was buried at Westminster Abbey, where he remained for just two years before King Charles II, who had spent the majority of his life in exile, returned to the throne.

Understandably, Charles II was not in the best mood after all that time, and wanted revenge for his father’s untimely death. He ordered that the body of Oliver Cromwell and the other regicides (king-killers who signed the death warrant) be exhumed from the abbey and posthumously executed.

The body of Oliver Cromwell and two other regicides, once dug up, were ‘executed’ at Tyburn, the site where for many centuries the criminals of London were hanged.

The bodies of the three men were buried beneath the Tyburn Tree in a pit, but the heads were put on spikes at Westminster Hall. At first this served as a grisly warning to others, but over time they became simply objects of morbid curiosity. Oliver’s head remained there until 1685, when it blew down in a storm. It was picked up and passed around until it eventually reached the hands of Sidney Sussex College Cambridge, where it was buried in a secret location.

Whitehall has Westminster at one end and Trafalgar Square at the other end. It’s where No. 10 is, and that wonderful memorial to women in the war, and a couple of pubs that loads of civil servants drink in. Entrance to the Banqueting House is £5, and is open 10am-5pm daily. You can see the spot Charles I’s head fell off just outside. Inside, ironically, Charles commissioned Rubens to paint a scene depicting the divine right of kings on the ceiling…

St George’s Chapel at Windsor Castle, where Charles I is buried

The place where Oliver Cromwell was initially buried

Oliver Cromwell died at Whitehall. The Banqueting House is the only surviving part of Whitehall Palace, but you can visit Westminster Abbey, where he was initially buried. After a bit of digging (pardon the pun) we found a description of his death and funeral proceedings on British History Online. This explains that shortly after his death, his putrid corpse had to be quickly removed and placed in Somerset House before being taken to Westminster Abbey. There is a plaque dedicated to those exhumed when Charles II was returned to the throne on the exterior of St Margaret’s church next to the Abbey. Entrance to St. Margaret’s is free – and Sir Walter Raleigh is buried here too. The church is open Monday – Friday 9.30am – 3.30pm and Saturday 9.30am – 1.30pm. On Sundays it is open 2pm – 4.30pm.

The place where Oliver Cromwell’s head is buried

After being passed around and sold on to various collectors, the head eventually ended up at Sidney Sussex College, Cambridge, which Cromwell once attended.

It was buried there in a secret spot to prevent royalists digging it up and destroying it. A plaque explains that the head is ‘nearby’. Call ahead if you want to visit, but they are very nice and we’re sure they’ll let you in. Unless you’re carrying a pickaxe and wearing a T-Shirt with a picture of Kate Middleton’s face on it.

If you’d like to visit Sidney Sussex College, it is advisable to call ahead on +44 (0)1223 338800. There is a sign at the entrance that says the College is closed, but pop into the office and ask and they should be able to help you. The plaque that explains the head is buried nearby is in the entrance hall of the college chapel.

The place where Oliver Cromwell’s body is buried

For a light-hearted romp through the history of Britain, including the bits with Oliver Cromwell, Charles I and Charles II in it – Travel Darkly recommends John O’Farrell’s
An Utterly Impartial History of Britain: (or 2000 Years Of Upper Class Idiots In Charge)

Other places of interest

There are also several Cromwell death masks you can see. These are in Warwick Castle, the British Museum, the Museum of London, Sidney Sussex College (you have to ask) and the Cromwell Museum in Huntingdon. Let us know if you are aware of more.

Death masks were very commonly taken from figures of importance throughout history. Wax was poured over the face. It was then removed when set and cast. Often, the more infamous a person was, the more death masks were made.