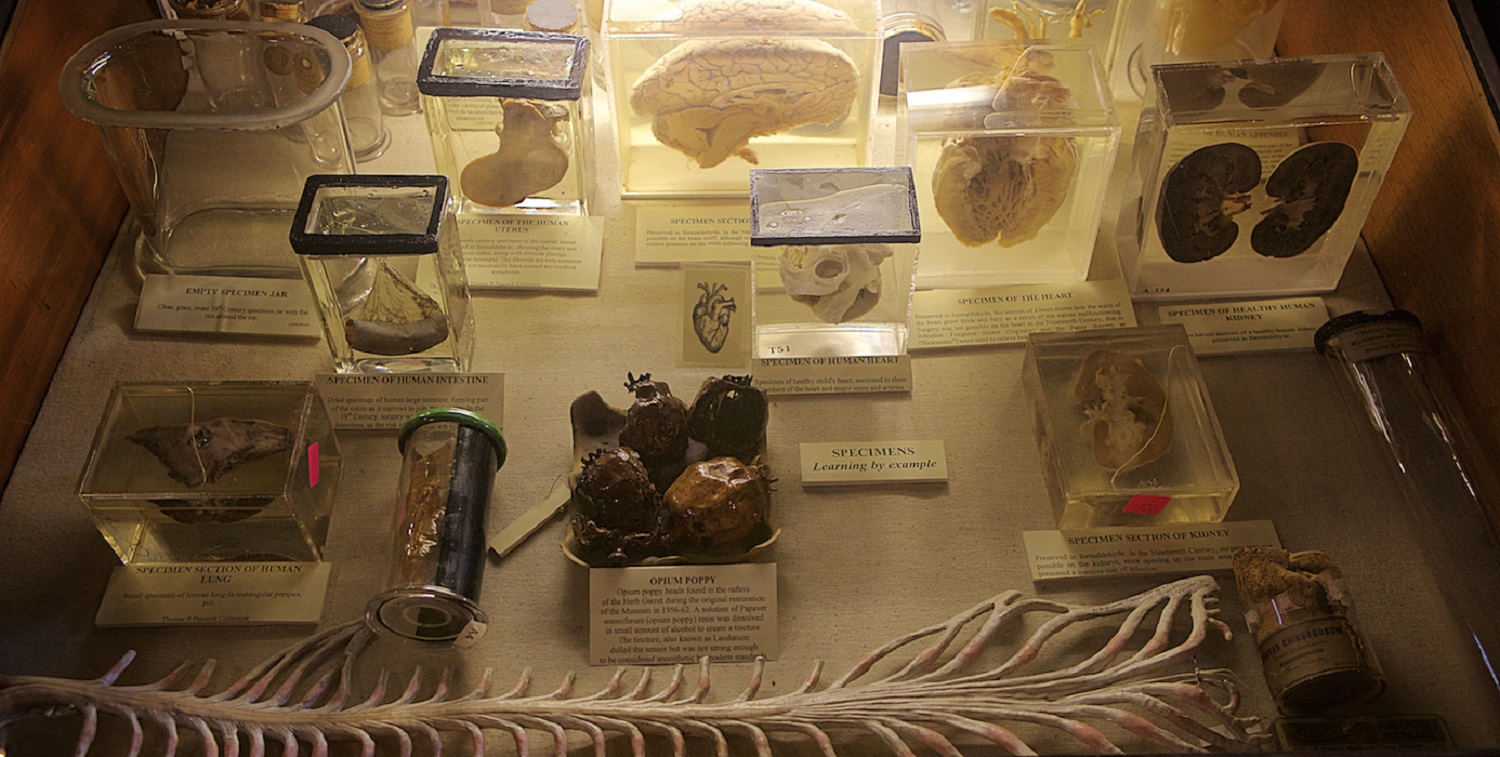 The Old Operating Theatre Museum, with its live re-enactment of surgery before anaesthesia, has been on Travel Darkly’s to-do list for a while.

Built in the roof of St. Thomas Church in 1822, the museum is accessed via a steep, narrow spiral staircase, leading to a small reception and gift shop filled with sparkly skulls, teddies, mugs and books.

Originally a part of the medieval St. Thomas’ Hospital, a charitable organisation for poor patients, the operating theatre is the only surviving one of its kind in Europe. Due to its Southwark location (once London’s grimy red light district, and also home to Cross Bones graveyard), the hospital had a reputation for treating prostitutes and their clients.

Cures for syphilis included mercury (likely to rot your jaws and intestines) and snail-water (as bad as it sounds). Men with venereal diseases might be offered leeches to stick onto their testicles.

The ‘incurable’ poor – including the mentally ill – were referred to Guy’s Hospital, which can still be seen across the street.

The museum itself is in two parts; after the gift shop you step into a timber-framed, other-worldly ‘herb garret’ (garret = attic) originally used by St. Thomas’ apothecary to store herbs and protect them from rats and water.

The garret is an amazing walk-through cabinet of curiosity, the soft shards of light from the windows illuminating specimens in jars with various nasty looking diseases, gleaming medical utensils, pills and potions, and pots of pungent herbs with their corresponding recipes.

The second part of the museum, connected to the garret, is the operating theatre itself. Theatres were often built in roofs to make use of the natural light from the ceiling, and this one would have originally been connected to ward for female patients, with women the only ones on the operating table. Before this the women underwent surgery in the ward itself, which was inconvenient and probably noisy for other patients thanks to the lack of anaesthetics and screaming.

At 2pm on Saturdays, the Old Operating Theatre offers demonstrations of surgery in action during the nineteenth century.

At St. Thomas’ Hospital Friday was free operating day, and if you were unlucky enough to have an accident on a Saturday you’d have to wait six days until your turn on the table. Surgeons could only do a very limited amount of procedures (including amputations and the removal of bladder stones), as complicated operations just ended in the patient dying of infection. Germ theory wasn’t accepted, and wooden operating tables and theatres ridden with bacteria didn’t help the situation.

Before an operation the surgeon probably wouldn’t bother washing his hands; not good bearing in mind he might have been dissecting a corpse before this. A contemporary account remarks that their coats would be ‘stiff and stinking with pus and blood’ – a kind of badge of honour.

The theatre could hold up to 150 apprentice surgeons in the stands, vying for a good view, plus a number of people around the operating table to hold the patient down.

Horse and cart accidents were common, often resulting in gangrene of the leg (which Gareth, our surgery demonstrator, says smells like almonds – hope you’re enjoying your battenberg cake). A broken leg will be the operation of the day.

Gareth asks the audience for a volunteer, and starts going through the operation procedures. A tourniquet is put on the leg, the skin is pulled back and an amputation knife is pulled from the red velvet-lined case. He demonstrates a ‘turn of the master’ cut – slicing in a circular motion though the leg, finishing off with some ‘bone clippers’ to get the last bits (audience faces looking as pale as mine). The stump is secured by cauterising (burning) it or securing it with catgut (actually not from cats but sheep or goats). Finally, the limb is put in a box of sawdust at the base of the table, and the medical instruments are wiped down with a sponge, probably the same one used to mop the surgeon’s brow. Apparently sawdust was also put around the floorboards, to absorb blood after complaints that it was dripping down into the church below during a service.

Around one in three people survived this type of operation, which would last 10-15 minutes. Limbs could be sawed off in under a minute. Time was of the essence due to the unimaginable amount of pain people suffered before anaesthetics (which were being used from around 1846 onwards). Brandy might be allowed on the ward afterwards, but alcohol thins the blood and was considered too unpredictable before surgery.

The Old Operating Theatre had closed before the advent of antiseptic surgery in the 1860s, having moved to Lambeth in 1862. It lay undisturbed for almost a century before it was rediscovered and restored, opening as a museum in 1962.

Although not really suitable for small children (or the very squeamish – when my uncle went someone fainted during the demonstration) the museum does have some activities for kids. The 32-step spiral staircase is currently the only entrance.