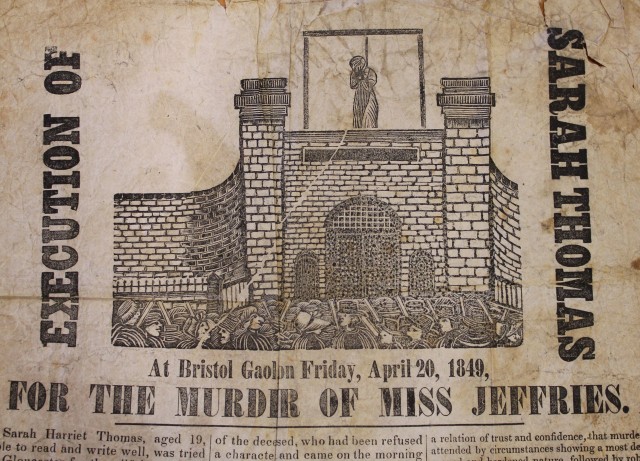 When 19-year-old Sarah Thomas was publicly hanged from the top of Bristol New Gaol in 1849 the prison governor fainted from the shock of the event.

There’s not much left of what was once Bristol’s ‘new gaol’, but what is left I have always thought was distinctly eerie. The old prison gatehouse stands on Cumberland Road, not far from Bristol harbour, where criminals were hanged in public. Designed with a special flat roof containing a trap door for the prisoners to drop down, in nineteenth-century Bristol going to watch a public execution was a popular occasion. People were so keen to get a good view of criminals’ deaths that the bustling crowds meant there was a considerable risk they would fall into the New Cut waterway behind the gatehouse.

The gaol was opened in 1820, with optimism high thanks to the expense involved in its construction (around £60,000 or £2 million today). Holding up to 197 men and women in single cells, this supposed state-of-the-art prison was to provide facilities like hot and cold water and decent bedding, in contrast to the squalid conditions of Bristol’s older prisons (e.g. Bridewell, where a cat was kept in the cells during the night to stop rats gnawing at the prisoners’ feet). Unfortunately this optimism was short-lived. The water turned out to be undrinkable, the windows were so small that the air couldn’t circulate, and prisoners were poorly clothed and often lacked shoes.

John Horwood (of the famed human skin book) was the first person to be hanged there in 1821, and the last public execution in Bristol occurred there in 1849.

19 year-old Sarah Thomas, mentioned at the start, was found guilty of murdering her elderly mistress Elizabeth Jefferies as she slept in her own bed. She also killed Elizabeth’s dog and chucked its body in a toilet. Despite not taking her trial particularly seriously at first, when the judge pronounced the verdict of death Sarah fainted and had to be carried from the dock. She then confessed to the murder and claimed that Elizabeth had mistreated her on several occasions.

On Friday 20th April 1849 a huge crowd gathered to see Sarah’s execution. She was dragged to the roof of the gatehouse struggling and protesting, strapped and held onto the trap and then quickly hanged. The event was by all accounts pretty traumatic; the hangman William Calcraft called Sarah ‘one of the prettiest and most intellectual girls I have met with’, and the prison governor actually passed out at the scene. She was the last teenage girl to be hanged in Britain.

Due to poor conditions Bristol New Gaol was closed in 1883. The gatehouse has been designated a Grade II listed building and will become a feature in the area’s redevelopment project.

The remains of Bristol New Gaol are located on Spike Island, Cumberland Road, in the car park to the rear of the M Shed museum.

Many thanks to Bristol Record Office and archivist Graham Tratt for allowing Travel Darkly to use images taken at the archives there.