The new First World War Galleries IWM London opened in July 2014, with the reopening of IWM itself.

We went to visit the museum ahead of this to check out what’s been under wraps these past couple of years. 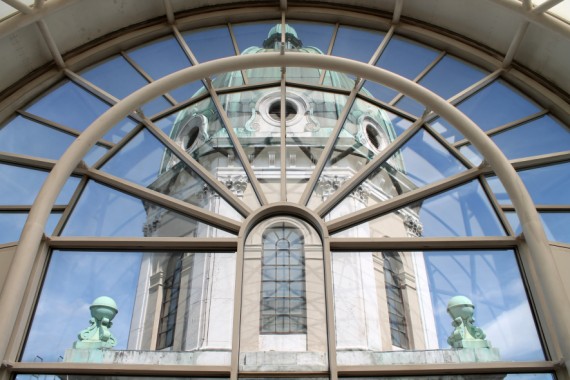 The First World War Galleries are impressive. There’s a lot there but the design is so clever that we didn’t feel overwhelmed. A lot of spaces and angles are used to draw out particular points of view by leading your gaze. Quotes are scattered about and the use of typography maximised to good effect.

We learn that seven million men marched to war in August 1914. A million of them lay dead by the end of the year.

Mainland Europe was embroiled in battle with British, French and Belgian troops, fighting German invaders in the west – and Germany and Austria-Hungary clashed with Russia and Serbia in the east. Countries from the empires of the European countries were drawn into battle too. Fighting took place also in Africa, Asia and the Middle East – as Germany attacked hoping to divert attention from the Western Front. 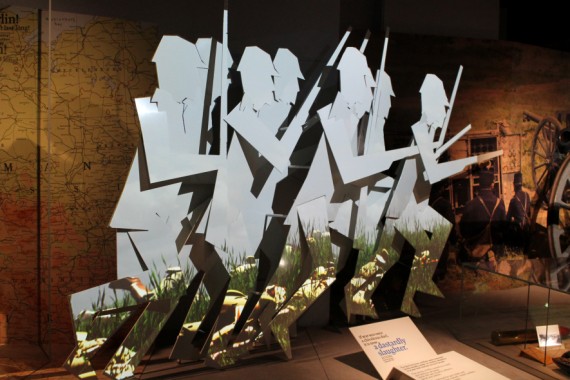 Between August and December 1914 an average of 2,000 French soldiers were killed every day. On top of this, Germany’s army massacred 6,000 Belgian and French civilians. 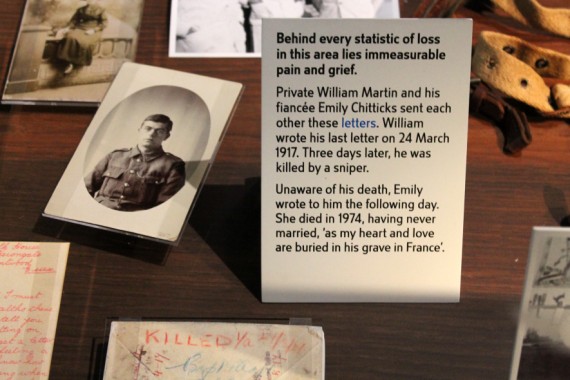 Private William Martin, who was killed in the First World War © Sophie Collard

Within nine months of opening its doors in June 1920, the Imperial War Museum at Crystal Palace had seen almost 1.5 million visitors.

We met James Taylor, the Lead Curator for the First World War Galleries at IWM on Lambeth Road, while we were there. 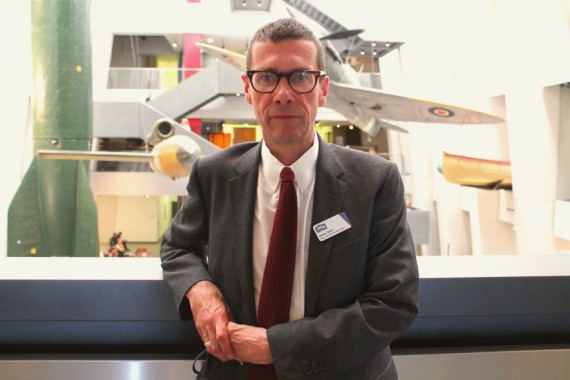 TD: “James Taylor, like the musician – bet you get that a lot.”
JT: “Yes, quite often. But that’s nothing – I used to work with a Neil Young.”
TD: (Laughs) “What’s been your involvement with the galleries?”
JT: “I head a team of curators, who worked on the content.”
TD: “And are you pleased with the result?”
JT: “Very, it’s been an enormous privilege, but also a huge responsibility. Those who were around during the First World War are dead now and we wanted to give them back a voice.”
TD: “We really liked how quotes have been used throughout the galleries actually. Was the design something you had a say in?”
JT: “The design evolved organically with designer, Casson Mann interpreting what we wanted to achieve.”
TD: “The single objects under glass are powerful, the glove that has been shrunk by poison gas stays with you.”
JT: “Yes, one of the things we wanted to do was to give the exhibits some space – these reflection spaces achieve that really well. Small objects can say as much as big. Just imagine what poison gas can do to your lungs if that’s what it does to a glove.”

It can be found on the Lambeth Road, London, SE1 6HZ