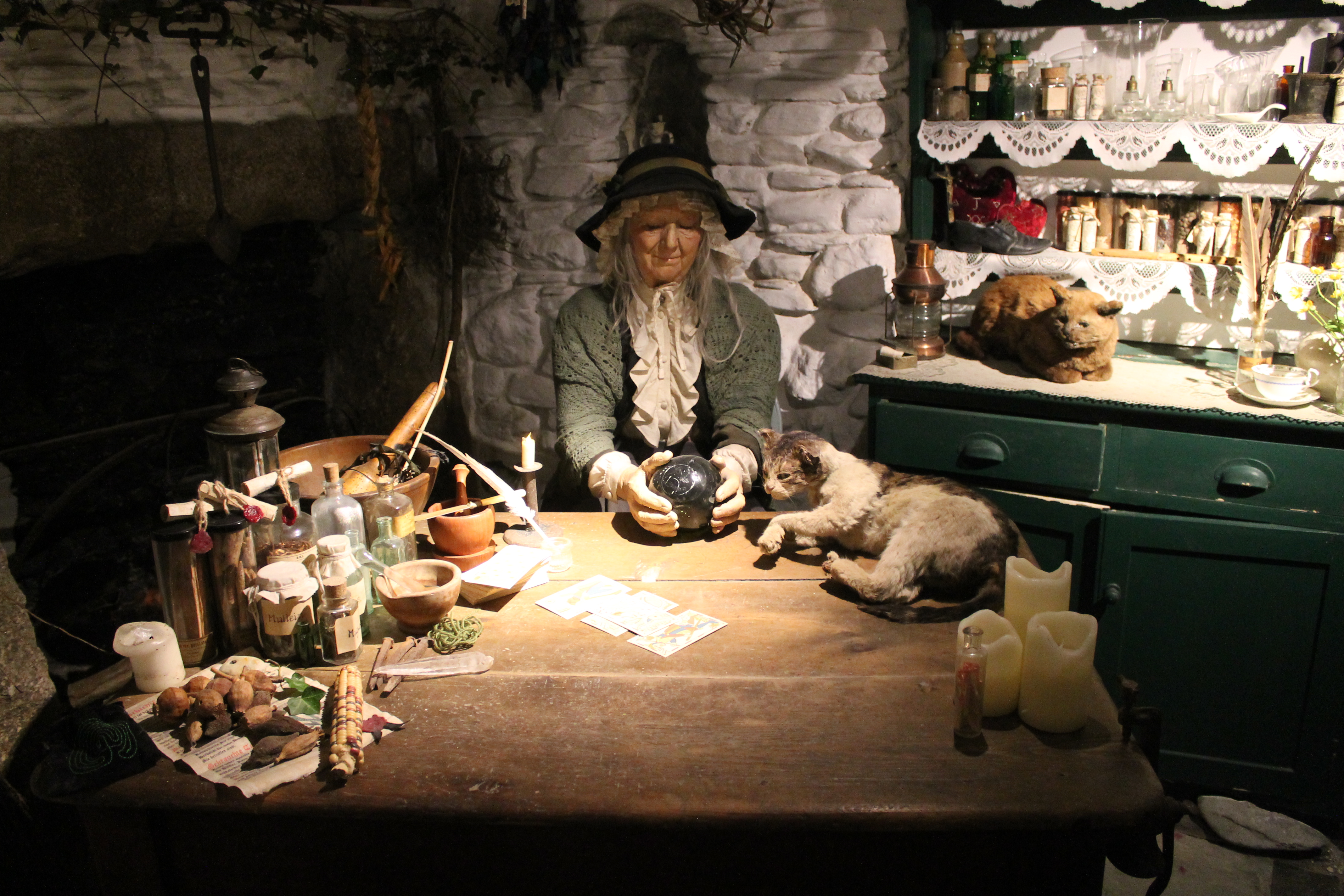 The inscription on the door to the Museum of Witchcraft and Magic, Boscastle, England, reads:

“The Museum of Witchcraft and Magic has been in Boscastle since 1960.

It is set over two floors in 10 galleries with nearly 4000 objects.

There are 25 permanent displays and an exhibition space that changes annually.

The quietest times to visit are mornings and after 4pm.”

The last part is particularly useful to know.

Hemlock is not totally poisonous

The label reads, ‘Hemlock is exceedingly cold, and very dangerous, especially to be taken inwardly. It may safely be applied to inflammations, tumults and swellings in any part of the body, as also to St. Anthony’s fire.’ – Culpeper’s Herbal

Anyway, on with the tour…

Firstly, with so many fascinating objects to look at, why not jump right in with a two-headed pig? “There is a wide-spread and age old belief among country-living people that any freak of nature is something special,” Museum of Witchcraft and Magic founder, Cecil Williamson wrote. Williamson noted that pigs have always been considered lucky, from lucky pig money boxes, to lucky pig charms carried around by gamblers (who knew) and reckons if a pig is lucky, then, “a two headed pig must be really something.”

Next up – good old dried cats (and a dried rat too). The inscription reads, “Dried cats are sometimes found concealed in old buildings. Their location and posture often indicate that they have been deliberately interred. These two cats were found together below the front door of a house in Bristol.”

A few years ago, our friend Laura Porter introduced us to the dead cat at the Museum of London. She wrote a post featuring it, Odd Dead Animals Where you Don’t Expect to Find Them, for the Londonist.

A charm to prevent further miscarriage

In 1976 a builder found a swift, “carefully wrapped in bedding and hidden in a sealed cavity above a ceiling in an old cottage in Falmouth.” He wrote to museum founder Cecil Williamson, then at the Witchcraft Research Centre, to ask what it was. Williamson told the builder, “a spell by a local witch to prevent her client from having a second miscarriage. The bedding from the first miscarriage was used in the spell and a bird was sacrificed – a life in exchange for that of the child to come.” The charm is a moving reminder that a lot of witchcraft was used to try and protect people from heartache of various kinds.

“Images made of wax or metal – representing a person, animal or part of a person’s body – are placed in shrines or churches in the belief that this will cure illness or injury. Sometimes these offerings are promised to God or a saint if the person or animal is cured, and then placed in the shrine in thanks after the cure has occurred.

Women were accused of witchcraft far more often than men (85% vs 15%) and the museum highlights the plight of women out of deep respect for them.

There’s a mannequin on display that wears various items once used to torture women. The scold’s bridle, that went over a woman’s head, wasn’t just for witches, it was for, “women who were argumentative, gossipy, nagging.” The device holds down the tongue to prevent the wearer from speaking.

It is noted that sometimes the device was even deadlier, “In 1591 Agnes Sampson of Berwick, Scotland ‘was pinned to the wall of her cell by an iron witch’s bridle, which had four sharp prongs that were forced into her mouth…’ Agnes eventually confessed to witchcraft and was strangled and burned.”

The names of women accused of witchcraft and put to death are listed behind the mannequin.

There’s also a plaque which reads, “It is estimated that around 50,000 people in Europe died after being accused of witchcraft. About a thousand were from the United Kingdom” before listing some of the names.

Witch trials in Scotland and England

Ronald Hutton, in his excellent book, The Witch, draws some interesting conclusions about people killed for practising witchcraft in the UK. The vast majority of executions were in the Scottish Lowlands, “where in relation to population witch-hunting was twelve times as intense as in England.”

According to the University of Edinburgh’s Survey of Scottish Witchcraft, 3,837 people were accused of witchcraft in Scotland. The survey suggests that perhaps 67% (around 2,570) of these people were executed.

Hutton says around 500 people were executed in England. The most famous English witch trial was that of the Pendle Witches in Lancashire.

The absence of witch trials in Wales and Ireland

There were very few witch trials in Wales and Ireland.

Hutton notes, “Witch trials seem to have been totally absent among the native Irish, and the rich Welsh source materials reveals just thirty-four of them… with just five executions.”

Ireland’s native population were majority Catholic and they’d likely have been reluctant “to denounce their own people for crimes that would be tried by a legal system dominated by British conquerors” (who were Protestant).

The lack of trials in Wales could have been down to “Welsh communities [being] more cohesive and less fractured by economic tensions than [in] England,” or, “a customary law that emphasised compensation of victims rather than punishment of criminals.” which is a lovely idea until Hutton points out that, “late sixteenth-century Wales had seen a ‘thief hunt,’ which had claimed about four thousand lives.”

Hutton suggests that, “In the case of Gaelic Scotland… [there was an] exceptional fear… of elves and fairies, the sithean.” This meant stuff that might be ascribed to witches in the Lowlands or in England was put down to elves and fairies in Gaelic Scotland. Also, “Gaels regarded curses and spells as a  legitimate means of furthering their own designs and thwarting and punishing enemies… There was little sense of witchcraft as an inherent force of evil that menaced the whole community.”

How to get to the Museum of Witchcraft and Magic, Boscastle, UK

Boscastle is a small village and there are signs clearly directing visitors to the museum.

£4 for children and concessions

FREE for under 5s