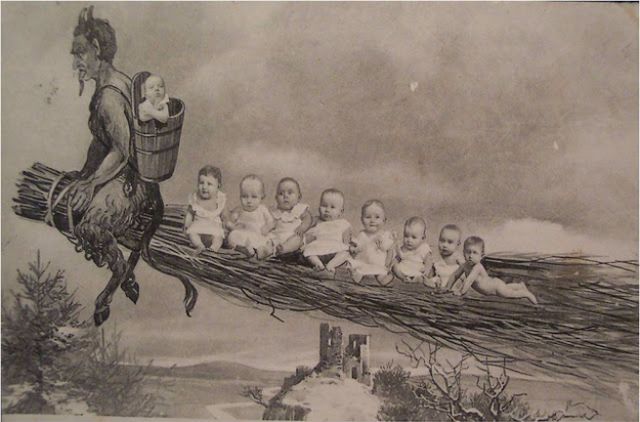 Remember when the worst thing your parents could threaten you with was a lump of coal in your stocking on Christmas morning? Not for kids in Austria and many Alpine countries, who were instead told they’d be captured by the Krampus: a half-goat, half-demon creature who would beat you, toss you in his sack and then throw you in a river. Or, if he really wasn’t in the mood, eat you or take you straight to hell.

On Krampusnacht (December 5th) Krampus rounds up all the bad children, leaving the good ones to be rewarded by St. Nick the next day (the Feast of Saint Nicholas). Vintage greeting cards show them doing a good cop/bad cop routine and collecting all the bad babies in their sack.

Krampus traditionally has a long curling tongue, horns, chains and some birch branches to bat at his victims. He’s thought to date back to pagan mythology, and by medieval times similar devils were appearing in Catholic plays (there’s also a likeness to some of the masks of shame in Germany).

Krampus was banned in 1930s Austria when facist rulers decided it was anti-Christian and blamed it on the Social Democrats. It’s back with a vengeance now though, where annual rowdy Krampuslauf runs see people dressed as demons chase bystanders through the streets.

How to see it

Austria, Germany, Hungary, Slovenia and the Czech Republic all have Krampuslauf runs. It’s also spread to Canada and America – at Santarchy, a big Santa parade later in December, you might see the odd devil pop up too.

The Plague Pits of London