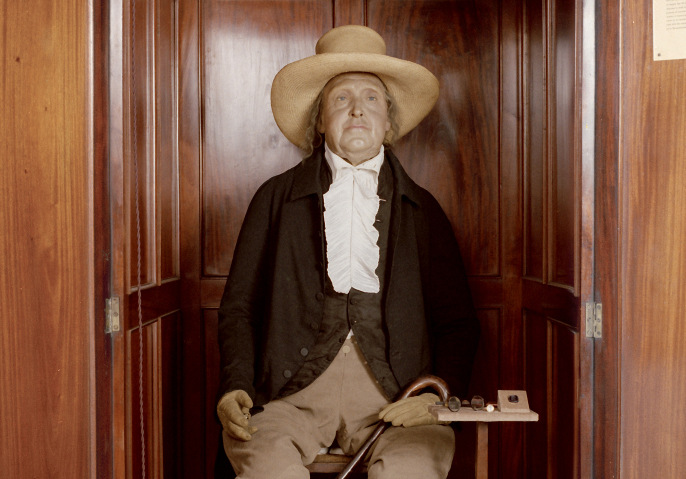 Of all the mascots you could hope for at university, what could be better than a taxidermied philosopher? UCL is lucky enough to have one – Jeremy Bentham. Dead Bentham, who in life was a big advocate of Utilitarianism (the greatest good for the greatest number of people), sits just inside the main entrance of the University in a wooden cabinet.

From October 2nd 2017 – 28th February 2018 we’re very excited to report that UCL is displaying Bentham’s mummified head as part of its What Does it Mean to be Human? Curating Heads at UCL exhibition.

An attempt was made to extract and sequence Bentham’s DNA, and a talk at the Octagon on Wednesday 11th October 2017 explores what happened. We wonder if he ever imagined such a thing when he asked to be preserved forever…

His is not the only head on display as part of the exhibition, there is also a bonus head – the head of Flinders Petrie, after whom the Petrie Museum, with all its Egyptian objects, is called. Petrie left his head to science.

Born the day after Valentine’s Day 1748 in Spitalfields, London, Bentham was something of a child prodigy. He began learning Latin at three and popped off to Queen’s College, Oxford at the sprightly age of just twelve.

Bentham’s father, a big shot attorney, was naturally thrilled about all of this, and hoped his Wunderkind would one day become Lord Chancellor of England. Bentham junior, however, was to become pretty quickly disillusioned with the UK legal system, instead deciding to put his talents to writing extensive criticisms of, and suggestions for, making improvements to the law. In fact, the design for Millbank Prison was his. He wrote about lots of other stuff too – society and ethics, that sort of thing.

Bentham died in 1832. His will stated that his friend,  Dr. Southwood Smith, should taxidermy him up:

“My body I give to my dear friend Doctor Southwood Smith… he will take the requisite and appropriate measures for the disposal and preservation of the several parts of my bodily frame in the manner expressed in the paper annexed to this my will and at the top of which I have written Auto Icon.”

We asked UCL curator, Nick Booth, how Dr. Southwood Smith carried out the preservation process of, and for, Jeremy Bentham.

“There are accounts of his autopsy and some records relating to how the auto-icon was made. For instance, we know that the room was lit up by a flash of lightning as they were cutting into his body, and his head was mummified by suspension over sulphuric acid (in ‘the Maori way,’ according to reports). You can still see the marks where it was held in place.”

“From what I understand it literally means ‘self-image’.”

“The head he’s got now isn’t his real head, it’s wax, so where is the real head now?”

“The head is stored in a climate-controlled safe, in a specially made wooden box with an image of the UCL portico carved on the lid, which takes two people and four keys to open. It’s under a glass dome.”

“In his will, he suggests people may want to occasionally meet to remember him – is there a day people come together to commemorate him?”

“Not that I’m aware of, however a month or so ago I did see a rose had been placed in front of the case. Roses were being sold in the quad for charity so I imagine it came from there, and it wasn’t on any particular date.”

“What are your favourite, accurate, stories that surround the auto-icon?”

“Well many myths around the auto-icon seem to have a basis in fact. About a year ago a colleague, who is an ex-Kings College alumni, showed me an article in their alumnus magazine detailing a raid on UCL in the early 90s by students, who kidnapped Bentham’s wax head. We had no record of this so I contacted the magazine editor (the article had been written anonymously) to see if they could put me in touch with the author, to find out exactly how they did it. The editor came back to me and, very apologetically, said the author had quite an important job and didn’t want his identity to be known (UCL had threatened to call in the police) but if he ever retired he would get back in touch to tell us how they did it. Funnily enough I did some scouting around online and found a photo of King’s students gathered around a box with Bentham’s head, looking very proud. I’m looking forward to finding out how they did it (and who it is). I also think this is the origin of the Bentham’s head as a football/head stolen by King’s students and found in a locker in Aberdeen stories.”

How to visit the auto-icon

Bentham sits in his cabinet every day to the left of the entrance of the really big domed University College London building on Gower Street. You can just walk in and say hello. We cannot confirm whether or not he comes to life at night.