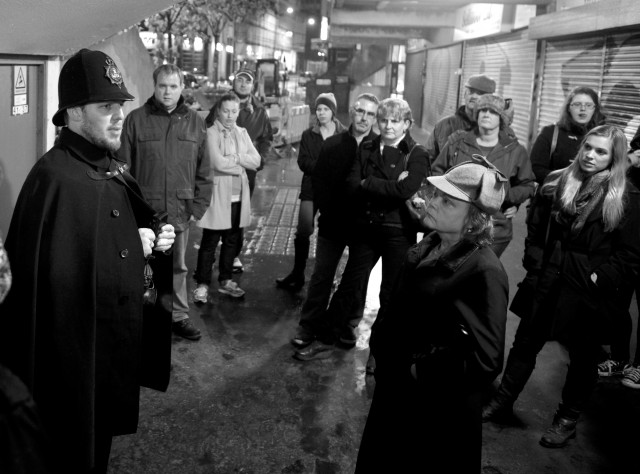 London. 1888. The so-called ‘Autumn of Terror’ reigns in the East End, as impoverished prostitutes are brutally slaughtered by a mysterious serial killer.

The story of the murders of Jack the Ripper are of such enduring appeal that even on a wet Monday evening in November there are at least 30 people waiting outside Aldgate tube station to start the Jack the Ripper Tour. As Greg, our tour guide (dressed as a nineteenth-century bobby) shouts to make sure everyone is present, I wonder why we’re all here – the unsolved mystery, the female victims, the grimy Victorian setting? Either way there’s no denying that these tours (and there are several to choose from) are today one of London’s top tourist attractions.

Greg starts the tour by explaining that the ‘Ripper killings’ were part of a spree of murders of prostitutes around Whitechapel between April 1888 and February 1891. London’s East End was overcrowded and desperately poor, with squalid living and working conditions. Poverty drove many to robbery and prostitution – London’s Metropolitan Police estimated that there were 1,200 women working as prostitutes in Whitechapel in October 1888. Many did so to pay for a bed for the night, or a drink to make things more bearable. Eleven women were killed between 1888 and 1891, five of whom have been attributed to Jack the Ripper due to the nature of the murders.

Mary Ann Nichols is thought to be the first of Jack the Ripper’s victims, murdered on the night of Friday 31st August 1888. Her body was found lying in Buck’s Row (which changed its name to Durward Street that same year in an attempt to divert unwanted attention) in the early hours of the morning. Mary Ann didn’t have the fourpence necessary to stay the night in a lodging house at Thrawl Street, Spitalfields, but assured the deputy that she would earn the money that night thanks to her new ‘jolly bonnet’. When she was found her throat had been cut twice, and her abdomen mutilated.

Just eight days later, Annie Chapman, who also went out on a Friday evening to earn enough money to pay for a bed, was discovered dead in the back yard of 29 Hanbury Street, Spitalfields, with similar injuries to Mary Ann. Elizabeth Long, a witness at the inquest, claimed to see Annie talking to a man near the back yard. She described him as over forty, of dark complexion and of foreign, ‘shabby-genteel’ appearance, and as wearing a deer-stalker hat and dark overcoat.

Panic started to rise in the capital as newspapers commentated on the crimes and speculated on the murderer’s identity. The police and the press started to receive letters which claimed to be from the perpetrator, including two potentially authentic ones signed from ‘Jack the Ripper’.

Sunday 30th September was the night now known as the ‘double event’, when both Elizabeth Stride and Catherine Eddowes were murdered within an hour of one another. Elizabeth’s body was found at around 1 am in Dutfield’s Yard, with one cut to the neck. The lack of further mutilation has led many to suspect that the murderer was interrupted in the act. Catherine’s body was found less than an hour later in Mitre Square, a mile away. That night she had been detained at Bishopsgate Police Station for drunkenness, and released at the same time Elizabeth’s body was found. Her throat was slit, her abdomen ripped open, and her left kidney and much of her uterus removed. Both Catherine Eddowes’ and Mary Ann Nichols’ graves can be found at the City of London Cemetery and Crematorium.

Part of Catherine’s bloodied apron was left nearby in Goulston Street, where the sentence ‘The Juwes are the men that will not be blamed for nothing’ was written on a wall in chalk.  Police Commissioner Charles Warren ordered that the words be washed off before daylight, fearing that it might spark anti-semitic riots. In doing so he arguably destroyed one of the most important clues in the case.

Police inquiries stepped up another gear. Over 2000 people were interviewed, 300 people investigated and 80 detained. Volunteers known as the Whitechapel Vigilance Committee scoured the streets in search of suspicious characters. The Committee’s chairman, George Lusk, received a letter ‘From Hell’ containing half a human kidney, thought by some to be Catherine Eddowes’, although its age and gender couldn’t be ascertained.

October 1888 passed by without any murders, but just as the East End started to breathe a sigh of relief the most brutal killing yet occurred. Mary Jane Kelly, an Irish immigrant and the youngest victim at around 24 years old, was discovered dead on her own bed in 13 Miller’s Court, Spitalfields, on Friday 9th November. Her throat had been severed down to the spine, most of her organs emptied, and her heart was missing. Mary Jane’s landlord described the scene as ‘more like the work of a devil than the work of a man’. This is thought to have been the last of Jack the Ripper’s murders.

Who was Jack the Ripper?

Many people fell under suspicion during police investigations and citizens’ efforts to find the murderer. Butchers and slaughterers were thoroughly investigated due to the manner of the mutilations, as well doctors and surgeons as many believed the culprit must have had some anatomical knowledge. Theories range from a failed barrister and a Polish Jew to Prince Albert Victor, Queen Victoria’s grandson, and there are now over 100 named suspects.

This particular tour is the only one to offer what they call Ripper Vision: the guides carry hand-held projectors to display images onto walls and alleyways as you walk around. This sounds like a bit of a gimmick but as well as the more gruesome pictures of the victims there are images of the streets and buildings as they would have looked in the nineteenth century, which makes it a whole lot easier to envisage when you’re staring at a very 21st-century curry house.

Our tour guide Greg was engaging, enthusiastic and obviously very interested in the case, with theories of his own. I was quite pleased there wasn’t any audience participation (shudder) or jumping out of dark alleyways shouting boo.

The tour follows the course of  events during Jack the Ripper’s murders, and ends at a car park in Dorset Street, near the murder scene of Mary Jane Kelly, once known as the worst street in London. It also stops at the Ten Bells pub in Spitalfields, reportedly where Annie Chapman was drinking before she was murdered, and outside of which Mary Jane Kelly picked up her clients.

The Jack the Ripper ‘Ripper Vision’ tour runs every day at 7.30pm from outside Aldgate East tube station. Tickets are £12.50 per person. Booking in advance is recommended, especially if you want to join a weekend tour.

Special thanks to photographer Simon Montgomery for taking many of the pictures for this post.