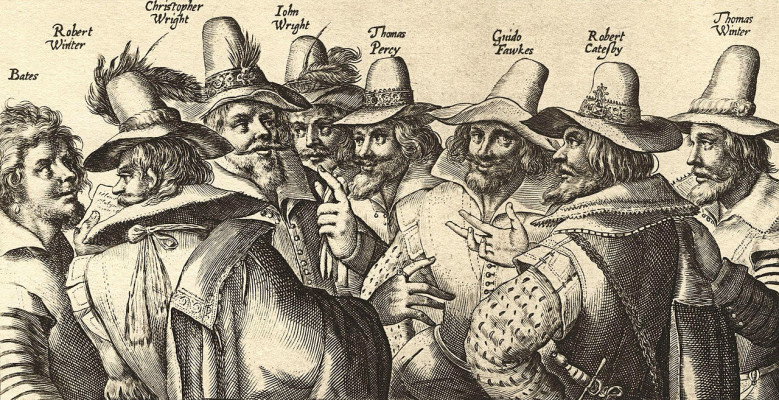 The 5th of November in the UK is Bonfire Night. It commemorates King James I not being blown up on that date in 1605, in what became known as the Gunpowder Plot. And by proxy, it commemorates Guy Fawkes being hanged, drawn and quartered in Westminster Palace Yard for treason. At that time, England was Protestant and practising Catholicism was illegal. Fawkes was one of a party of thirteen Catholic conspirators.

A ‘Guy’ effigy is traditionally burned on bonfire night. In the past it might have been an effigy of the pope. In more recent times, effigies of unpopular politicians have been burned, but the burning man is always referred to as a Guy.

The spared King James I was by all accounts a bit paranoid. He hated Catholics and many of the ‘witches’ who were executed under his rule were in reality just Catholics labelled as witches for convenience. He wrote an entire book called Daemonologie and delighted in the punishment of the treasonous and potentially treasonous.

Guy Fawkes was born in York in April 1570. He left Yorkshire to fight with the Spanish armies who were facing attack from Protestant rebels in what is now the Netherlands.

He had a reputation as an explosives expert. Because of this, a group of Catholic extremists approached him, and together they came up with a plot to blow up the king and assembled royals, who would be present at the opening of parliament on November 5th. Fawkes was to set a carefully assembled pile of gunpowder alight, which had been placed in the cellars underneath the House of Lords, and then make his escape across the Thames and out of the country.

Their plan was foiled, however, when the king got a tip-off before 5th November. The basement beneath the House of Lords was searched. Guy Fawkes was found, but gave a false name (John Johnson – must try harder) and an excuse for being there. At first it worked, but officials later twigged and arrested him and the others he had plotted with.

Fawkes actually avoided being disemboweled and cut up whilst still alive (the standard punishment for treason) by jumping from the gallows and breaking his neck before the authorities could see the whole grisly procedure through. After he was executed, on January 31st 1606 in Westminster Old Palace Yard, four pieces of him were sent to four corners of the country as an example to others. Bonfires were encouraged in celebration on that day in 1605 – joined by fireworks in the 1650s and the burning of effigies in the 1670s.

Guy Fawkes Inn is on the site where Guy Fawkes was born in 1570. It is located at 25 High Petergate, York YO1 7HP.

To sit in the pub will cost you the price of a drink, or you can stay in one of the rooms upstairs. It is open daily.

Guy Fawkes was held in the Tower of London and tortured there. Nearer the end of his life, he signed his name in a way that suggests a torture instrument such as the rack had been used to ‘stretch him out.’ Although steadfast at first, Fawkes eventually succumbed to the torture to reveal details about the plot and his conspirators.

You can visit the Tower of London and see where he would have been held, as well as discovering the history of the other famous prisoners. You can also visit the armouries and see the ravens. It is said that if all the ravens leave the Tower, the Kingdom will fall.

Adult admission to the Tower of London is £27.20 and children are £12.90 (on the gate and including voluntary donations).

The Houses of Parliament

The Palace Yard is the place where Guy Fawkes and the other conspirators rented a house before renting the cellar under the House of Lords. They were hanged, drawn and quartered in the same space as a lesson to everyone.