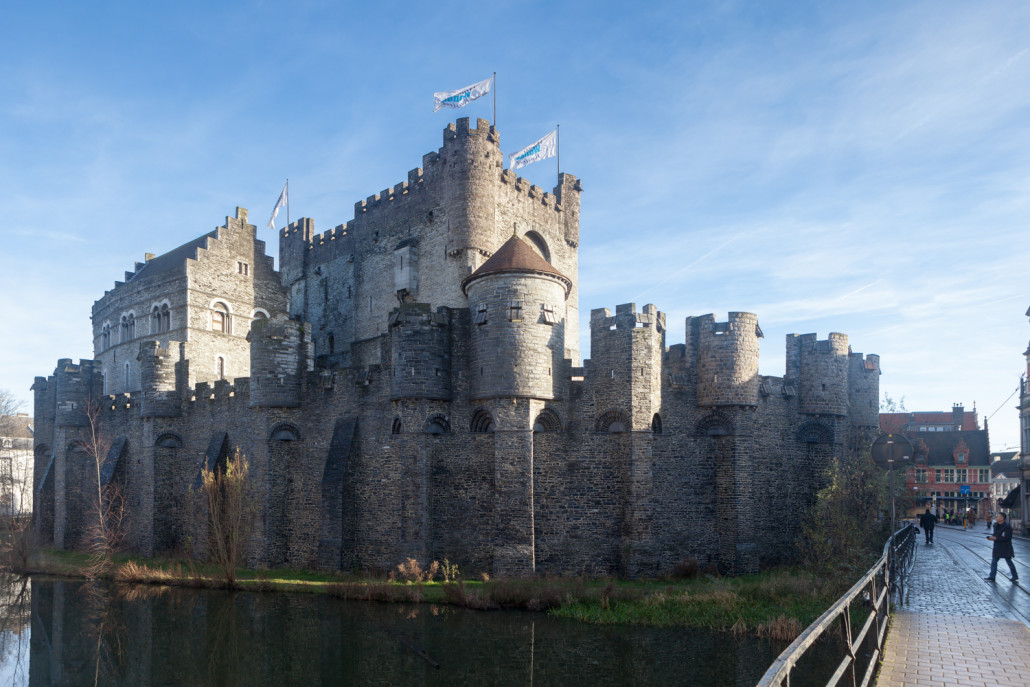 Gravensteen castle, the Castle of the Counts © Simon Montgomery

Right in the middle of Ghent’s old town is the Gravensteen castle (aka the Castle of the Counts), a medieval castle once belonging to the counts of Flanders. 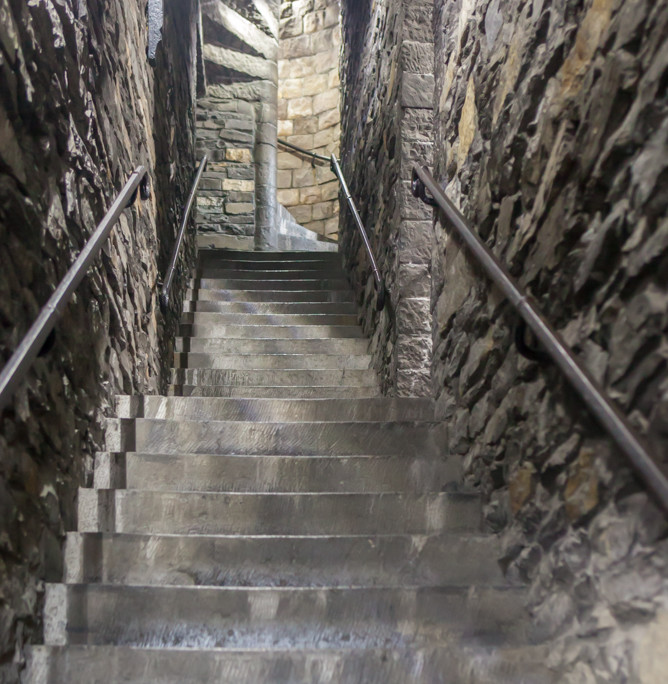 As the seat of the Council of Flanders the castle was used as a courthouse and a prison from the fourteenth to the eighteenth centuries, and the accused were held in the dungeons there before or during their trials. Executions happened inside or in front of the gatehouse.

Under medieval law people had to confess before they could be found guilty, so unsurprisingly torture played an important role at the castle. The dungeon ‘torture chambers’ were host to a whole load of horrifying methods of extracting confession, now on show on the second level of the castle. 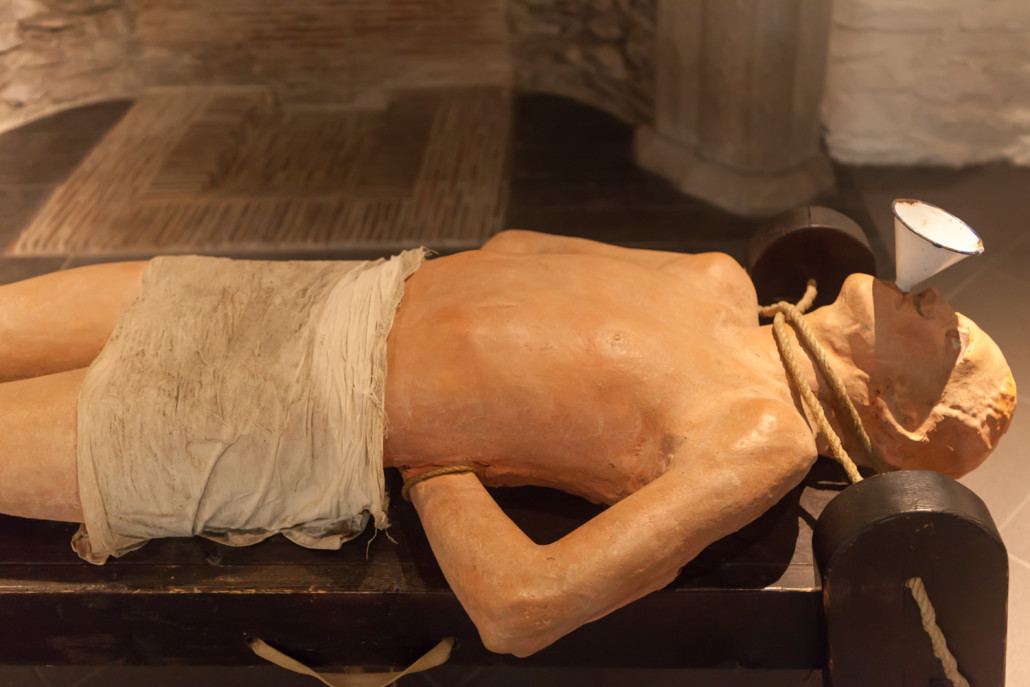 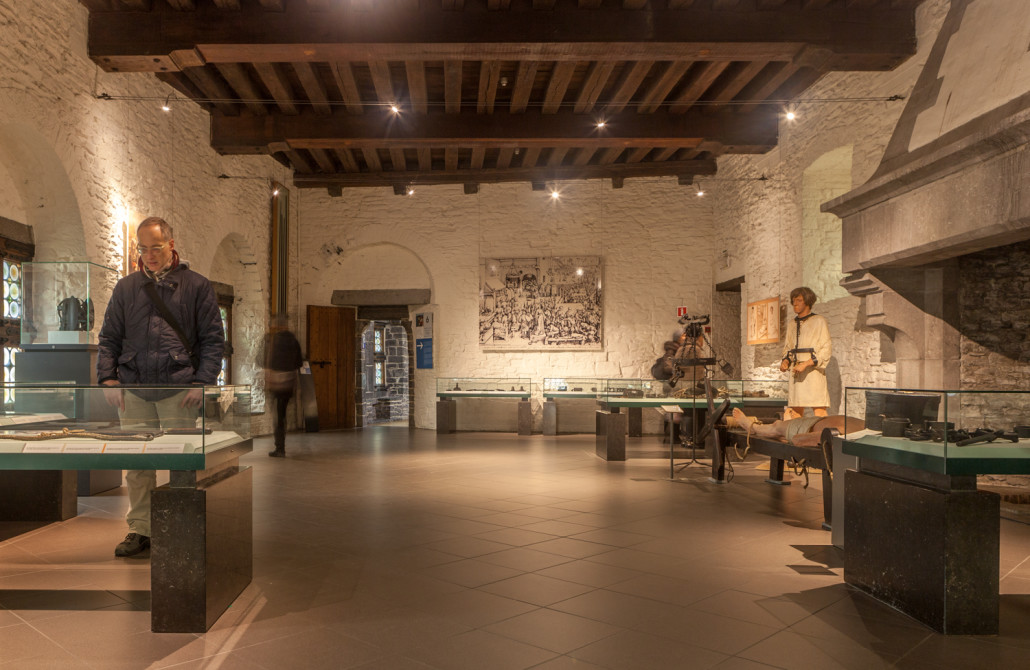 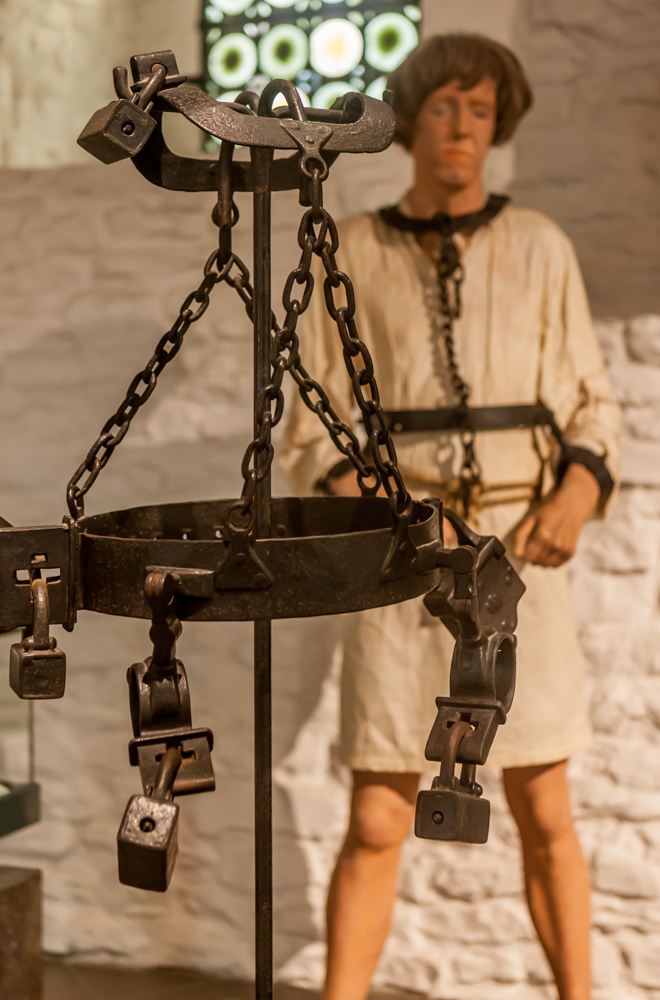 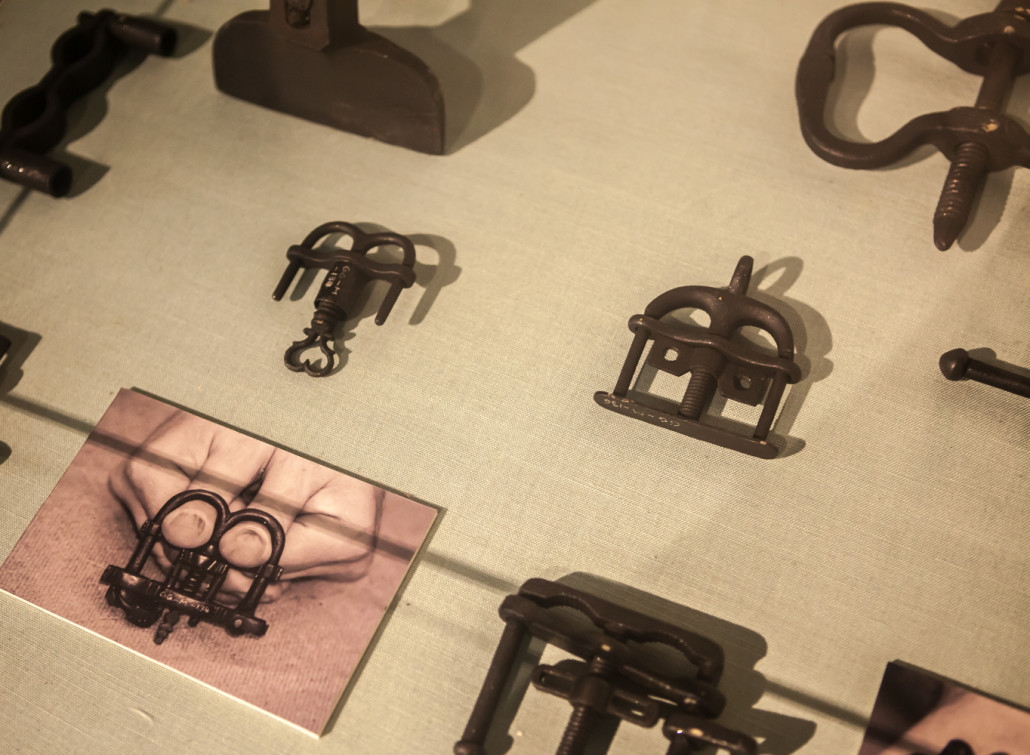 Thumb screws used to achieve confessions, often in witch trials. If a confession took too long then your fingertips might be shattered with a small hammer © Simon Montgomery

The museum includes various painful looking metal implements with two dioramas thrown in for good measure. Toddlers are led swiftly around the room despite their fascination with what’s on show, asking awkward questions and shouting down the funnel of the poor man tied to the stretching rack.

There are also a couple of exhibits relating to the treatment of the mentally ill (more info about this here), including pear-shaped wooden balls which were put into people’s mouths and tied around their heads to stop them screaming. These were known as ‘anxiety pears’, presumably as they were an attempt to stop the symptoms of anxiety rather than due to the obvious anxiety having one of these stuffed in your mouth might cause. 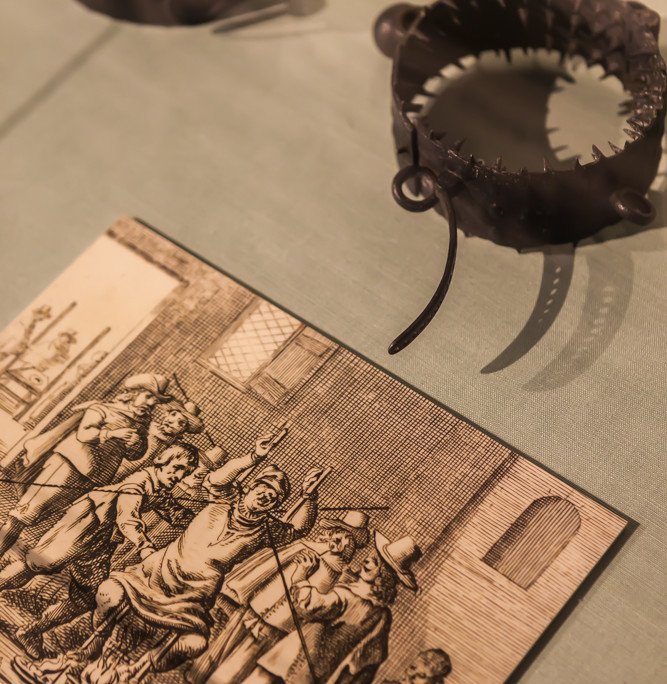 Iron collars with five rows of spikes were put around people’s necks. You’d be put on a stool in the middle of the torture room, with the collar tied diagonally to the walls. Any movement would cause the skin to tear © Simon Montgomery 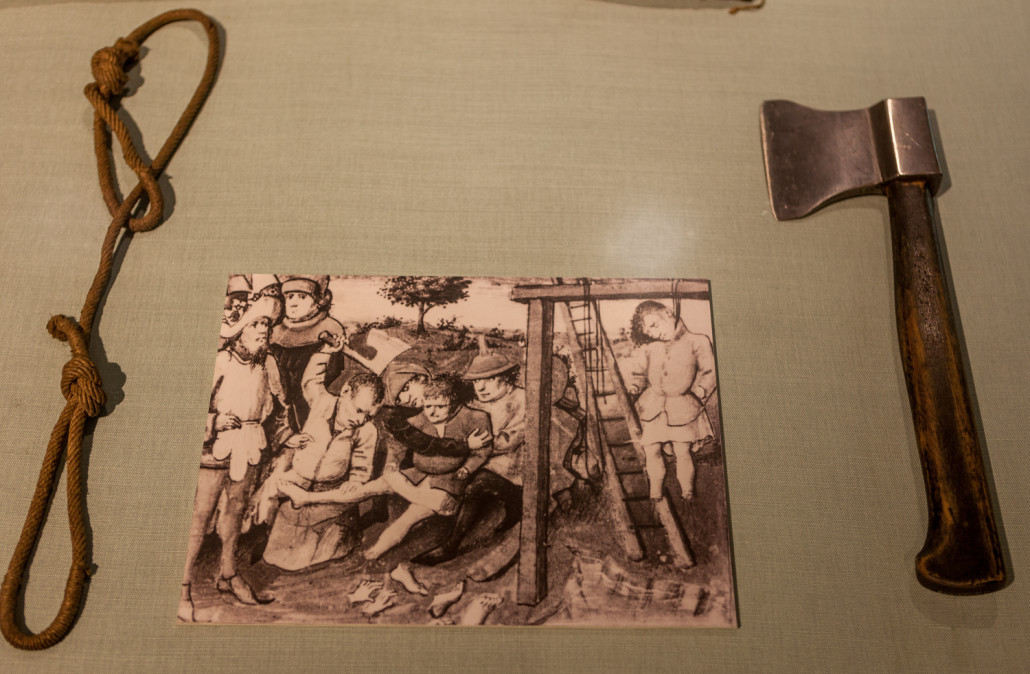 The tools of the last executioner of Ghent, Jean Guillaume Hannoff (1787-1866), including a noose and an axe for corporal punishment (chopping off hands, feet and heads (if you’re lucky)) © Simon Montgomery 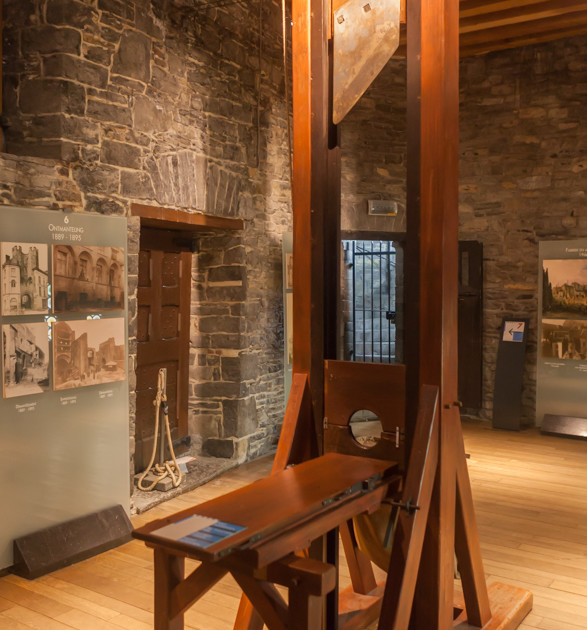 Copy of a guillotine with an original blade © Simon Montgomery

The castle was almost demolished in the nineteenth century; for the people who lived around it it had become a symbol of the abuses of the nobility and the inhumane torture carried out within its walls. Thankfully it was instead restored, with its torture museum a grim reminder of the injustices of the past. 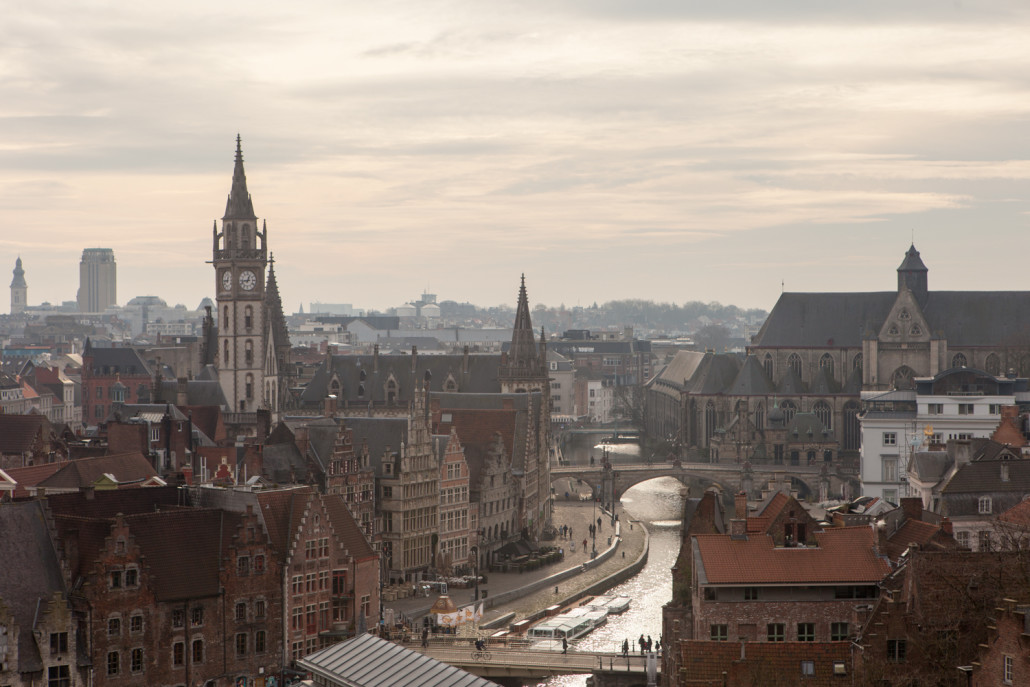 Light relief: the view of Ghent from the top of Gravensteen castle © Simon Montgomery

Open from 10am-6pm from 1st April to 31st October, and 9am-5pm from 1st November to 31st March. Adults are €10 (discounts if you’re under 26 and free for under 19s). Alternatively we’d recommend buying a CityCard from Ghent’s tourist information centre, which gives you access to all of the city’s museums, free public transport and a boat ride – €30 for 48 hours or €35 for 72 hours.

The castle also has a museum of medieval weapons, a floor down from the torture museum. 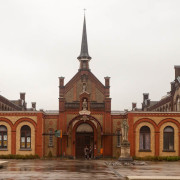 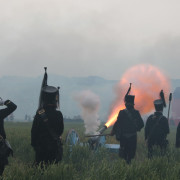