‘The figure stopped, and at the moment a ray of moonlight fell upon the masses of driving clouds, and showed in startling prominence a dark-haired woman, dressed in the cerements of the grave. We could not see the face, for it was bent down over what we saw to be a fair-haired child

…we could see that the lips were crimson with fresh blood, and that the stream had trickled over her chin and stained the purity of her lawn death-robe’. 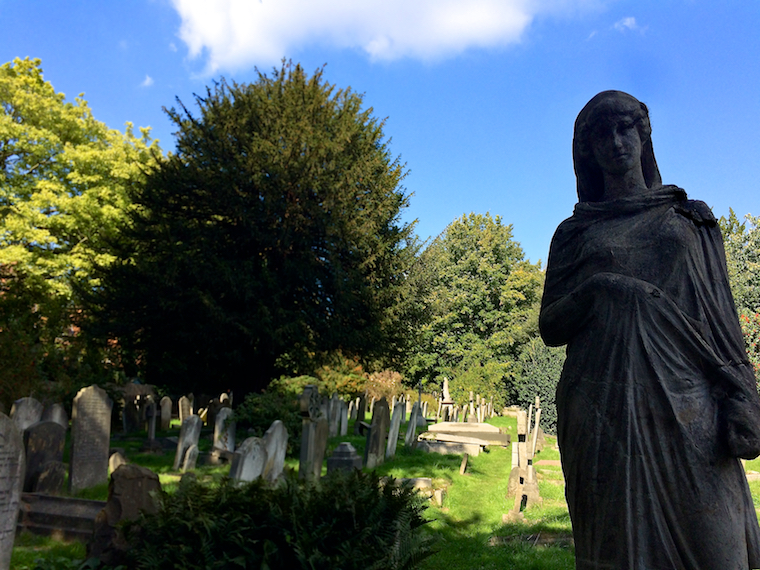 Nestled between Hampstead’s genteel brick houses is St. John-at-Hampstead’s graveyard, thought to have inspired scenes in Bram Stoker’s Dracula (1897). The graves are split into two parts either side of the road, and although it’s not a very big area you can see how Stoker might have imagined its crooked ivy-covered tombstones and dark shaded corners when he was writing about Lucy Westenra’s night-time activities. The doomed Lucy is drained of her blood by Dracula and turned into a vampire. She rises from her grave at night to feed upon children she finds on Hampstead Heath. 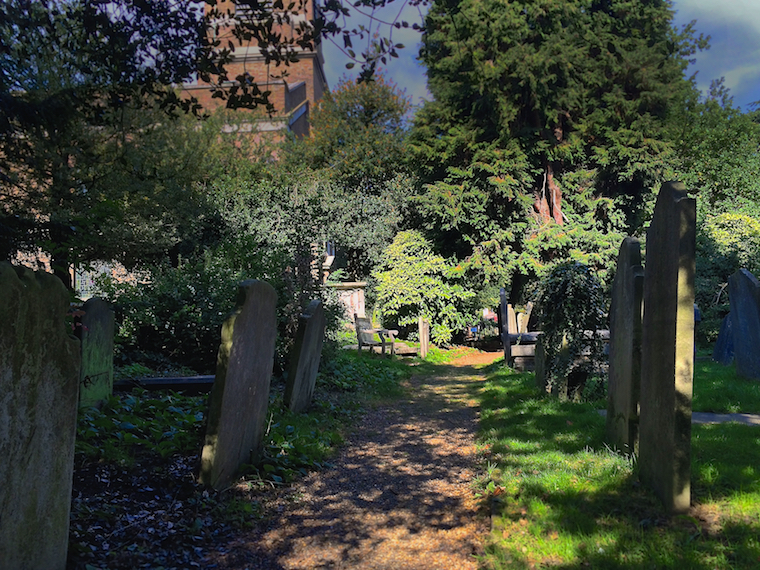 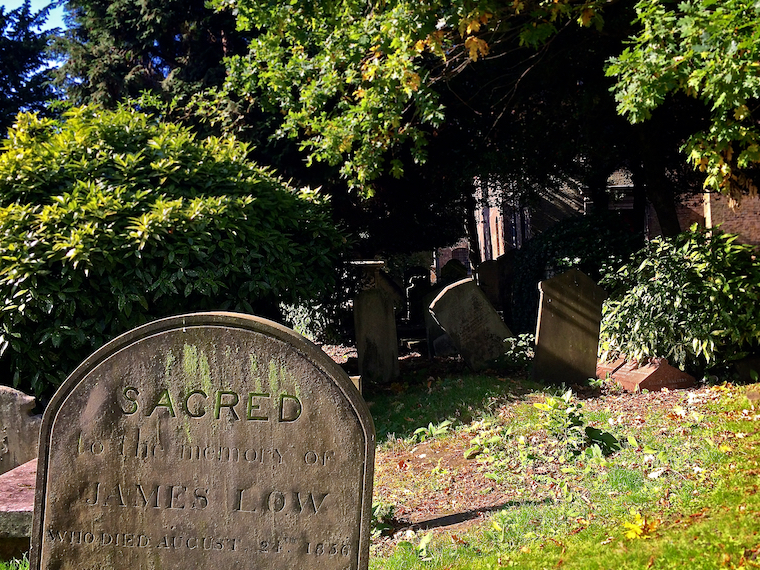 In the story Dr. Van Helsing and Dr. Seward eat at Jack Straw’s Castle pub before they go to investigate Lucy Westenra’s tomb. 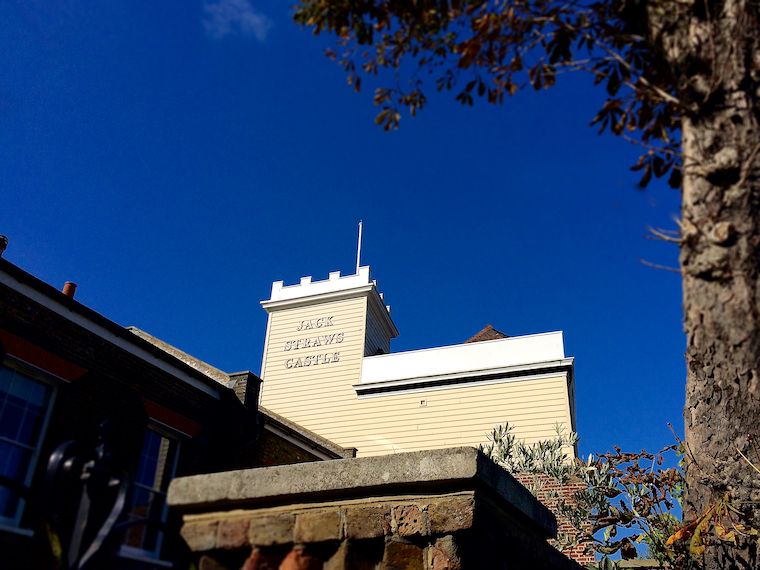 Now flats, the original Jack Straw’s Castle pub was destroyed in the the Blitz. It’s named after the leader of the fourteenth-century Peasants’ Revolt, who is said to have lived there © Katherine Conlon

‘About ten o’clock we started from the inn. It was then very dark, and the scattered lamps made the darkness greater when we were once outside their individual radius… At last we reached the wall of the churchyard, which we climbed over. With some little difficulty, for it was very dark, and the whole place seemed so strange to us, we found the Westenra tomb’.

They find the tomb empty, hide and wait. 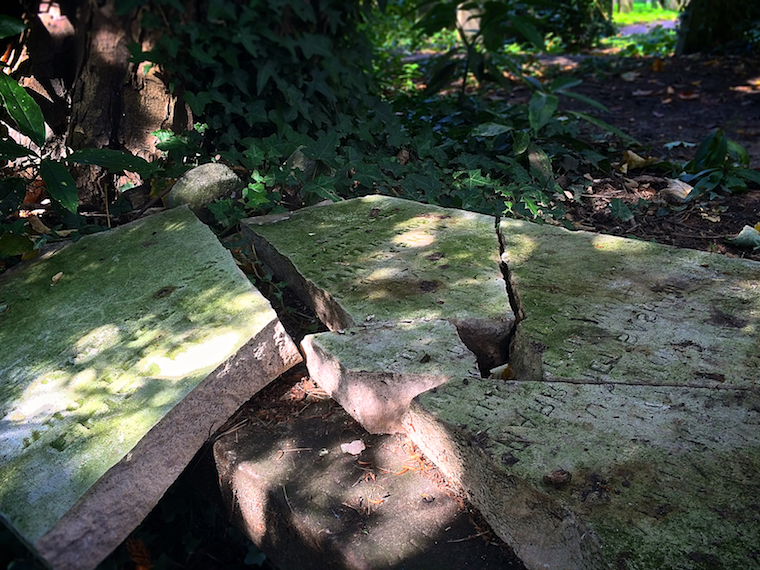 ‘Suddenly, as I turned round, I thought I saw something like a white streak, moving between two dark yew trees… a white dim figure flitted in the direction of the tomb.’ 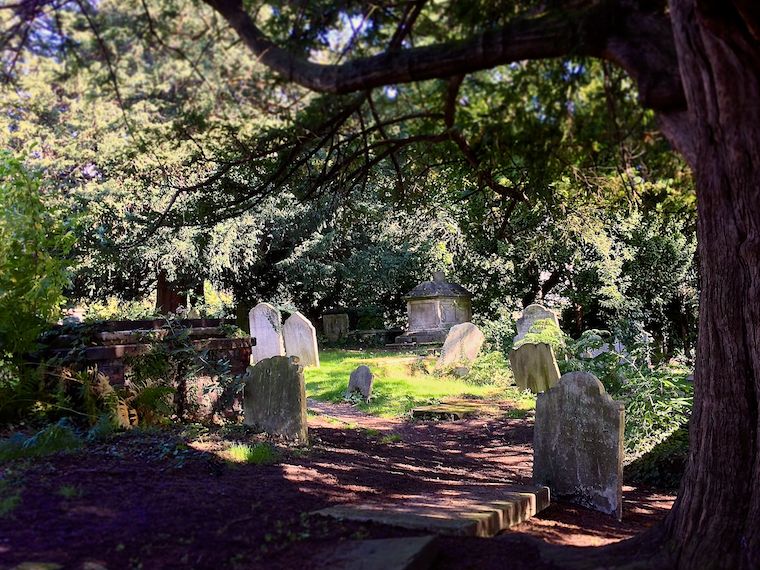 Lucy has brought a child back to her grave, but luckily Helsing manages to rescue it before she digs in and they leave it to be found by a policeman on Hampstead Heath (it’s obviously a deep sleeper as it doesn’t wake up the whole time). The next day they return to find Lucy back in her coffin, ‘more radiantly beautiful than ever’ but with the unwelcome addition of long canine teeth. The pair discuss the best ways of dealing with the situation.

‘How will you do this bloody work?’

‘I shall cut off her head and fill her mouth with garlic, and I shall drive a stake through her body’. 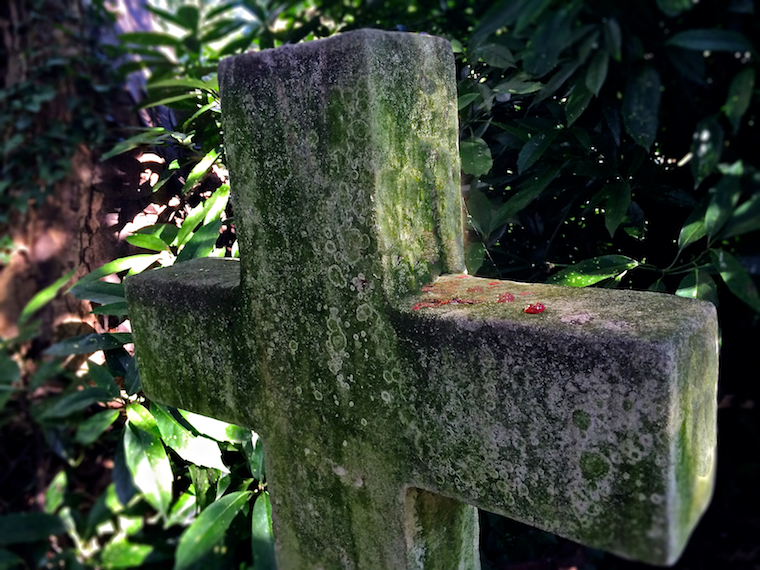 In fact it’s Lucy’s husband Arthur who drives the stake into her heart the second night they see her bring a child back, witnessing first hand the monster she had become.

‘…a hideous, blood-curdling screech came from the opened red lips. The body shook and quivered and twisted in wild contortions. The sharp white teeth clamped together till the lips were cut, and the mouth was smeared with a crimson foam.’

Helsing and Seward finish the job with the decapitation and garlic to prevent Dracula removing the stake and bringing Lucy back to undead life once more.

‘Outside the air was sweet, the sun shone, and the birds sang, and it seemed as if all nature were tuned to a different pitch… Before we moved away Van Helsing said, “Now, my friends, one step of our work is done, one the most harrowing to ourselves. But there remains a greater task: to find out the author of all this our sorrow and to stamp him out”‘. 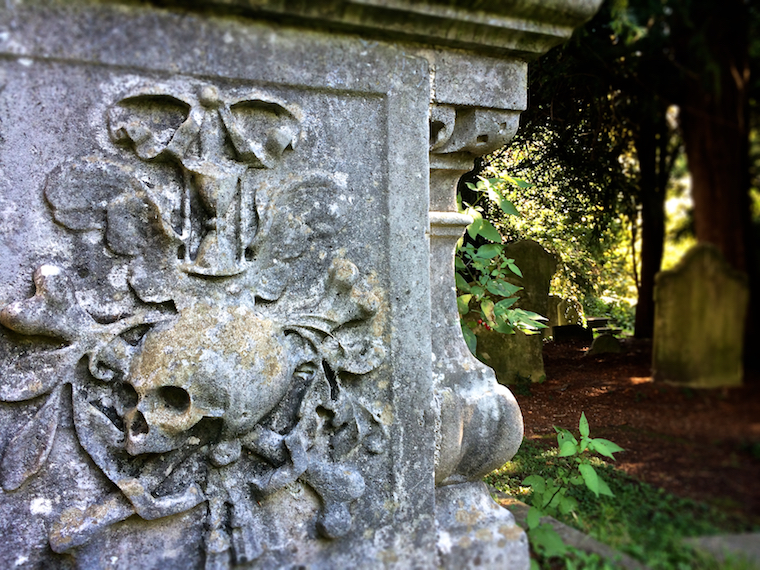 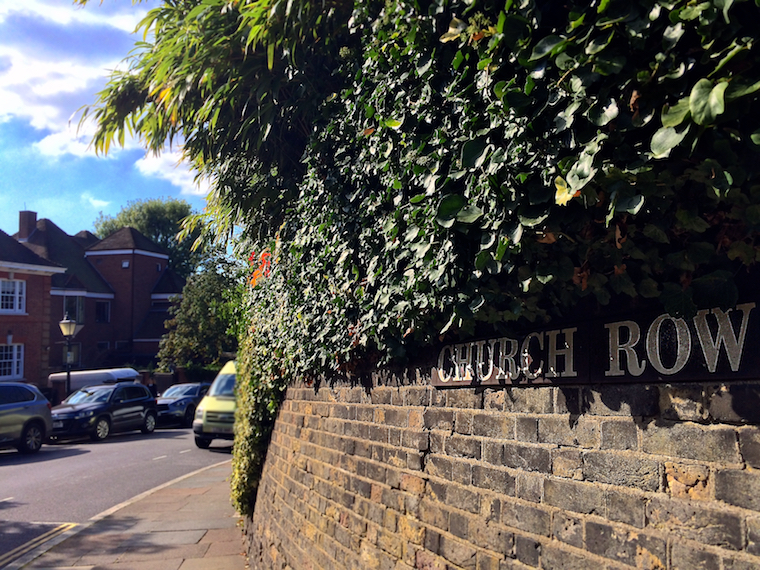 The family tomb of Romantic painter John Constable can be found in the graveyard, as well as the Labour leader Hugh Gaitskell and inventor John Harrison (there’s a map there with the burial sites).

Church Row is also said to be haunted by the ghost of a red-haired maid who murdered a young child in the nineteenth century and smuggled the remains out of the house. She walks towards the church at sunrise to dispose of the body parts, but disappears before she can enter the gates.