The competition’s tough when it comes to Derby’s haunted pubs. Here are Travel Darkly’s top three, including an underground tour with Most Haunted‘s Richard Felix.

The seventeenth-century Old Bell possibly wins the crown for Derby’s most haunted pub. In fact Most Haunted have been there, drawn to the infamous Room 29 in what was once lodging for the poor, located at the top of a winding staircase dotted with tealights. 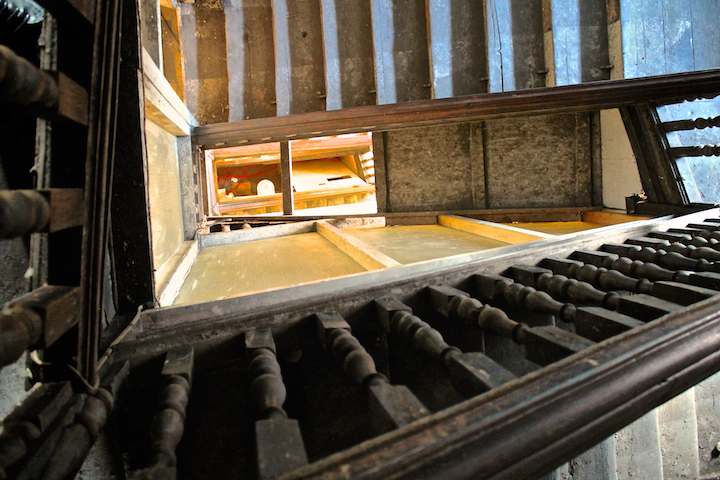 The Jacobean staircase leading to the infamous Room 29 © Travel Darkly

Stories vary but focus around a young pregnant maid who hanged herself after her boyfriend was sent away to war, and the murder of a serving girl committed by one of Bonnie Prince Charlie’s soldiers in the eighteenth century. Since then those staying in Room 29 have reported seeing a woman tending to the babies and children sleeping there. 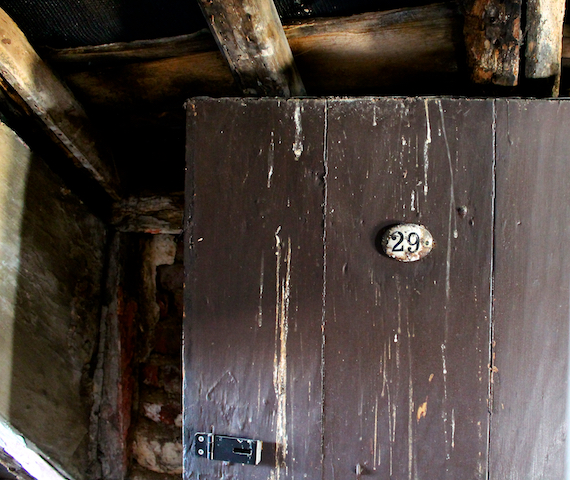 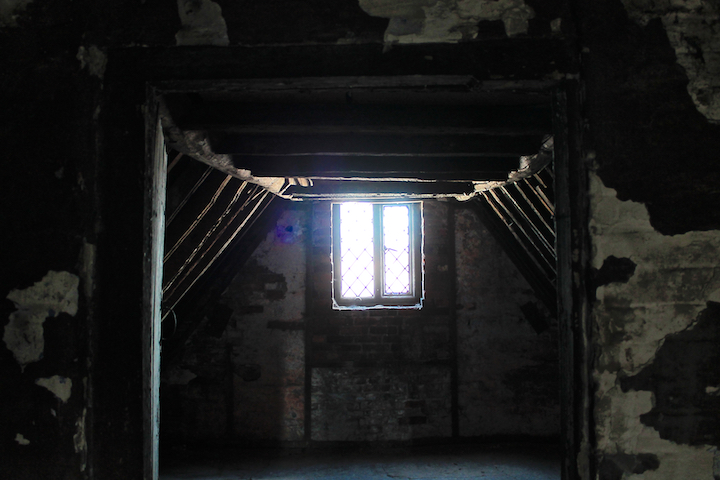 When Most Haunted visited, Derek Acorah claimed that it was, in fact, the room next door to Room 29 which ‘had more evil in it’.

Would Paul Hurst, who bought the pub in 2013 and is restoring it to its former coaching inn glory, be tempted to spend the night in there? “Not for any price,” came his reply with a smile (and this renovation is not cheap). Paul is eventually planning on opening hotel rooms, if he can encourage his contractors to stay long enough to finish the job. Many have been spooked by the atmosphere, hearing noises and finding items unusually placed in the mornings. One time Paul arrived to find a contractor sat in his car, refusing to enter the pub again alone. 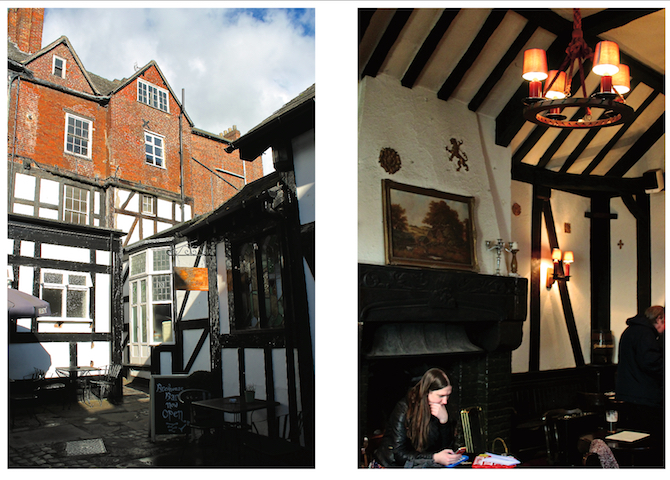 The courtyard entrance to the Tudor Bar at the Old Bell, and inside. The Tudor Bar was gentleman-only up until the 1970s before falling into disrepair. Owner Paul Hurst, who is bringing the pub back to life, told us they found a coffin under the bar’s floorboards, believed to be empty © Travel Darkly

You can visit Room 29 on the Derby City Centre Ghost Walk, which also finishes with dinner at the pub. 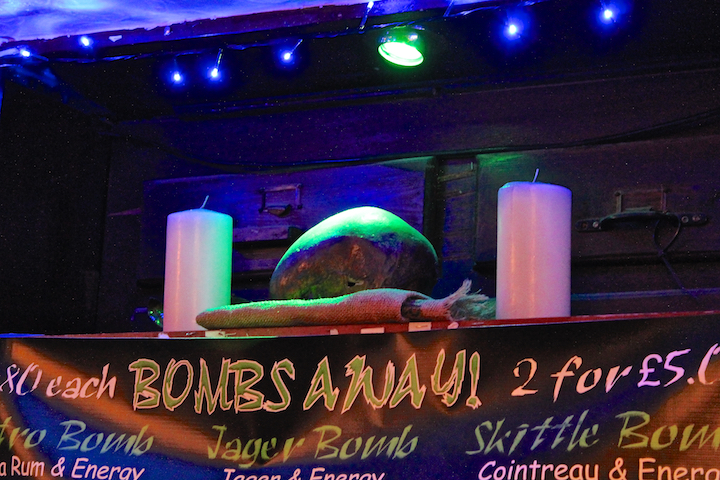 Illuminated by green lights behind the bar of Jorrocks sports pub is a damaged female skull, known as George. The man behind the bar told us it was discovered when workmen were digging up the cellars in the 1990s, along with animal bones and scraps of leather. Police took it away to investigate, but found it to be pretty old (no one knows how old, although the sign outside Jorrocks claims it’s Viking). The damage – what looks to be a heavy, blunt force to the skull – can’t be accounted for either, but apparently poltergeist activity has been reported around where it was found. 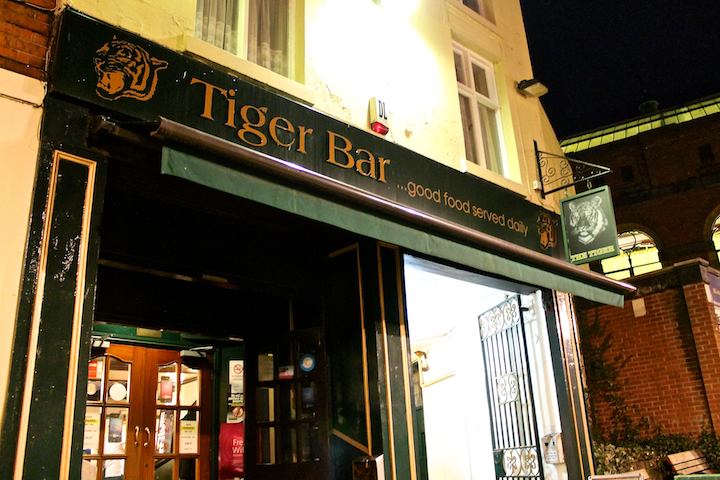 The network of tunnels beneath Derby’s Guildhall were once used to transport prisoners between the police station and the courts. They’re now accessed via a back room in the Tiger Bar – such an unlikely venue that when we arrive on a rowdy Saturday night we wonder if we’re in completely the wrong place until we spot the black leather jacket of Richard Felix swooping past us to the bar. Felix – of Most Haunted fame – is a local celebrity in Derby, and as we prepare to go into the back room there’s a chorus of “Oooooooooh, Richard’s taking you down his tunnel is he?!” from a group of men sat at a table. 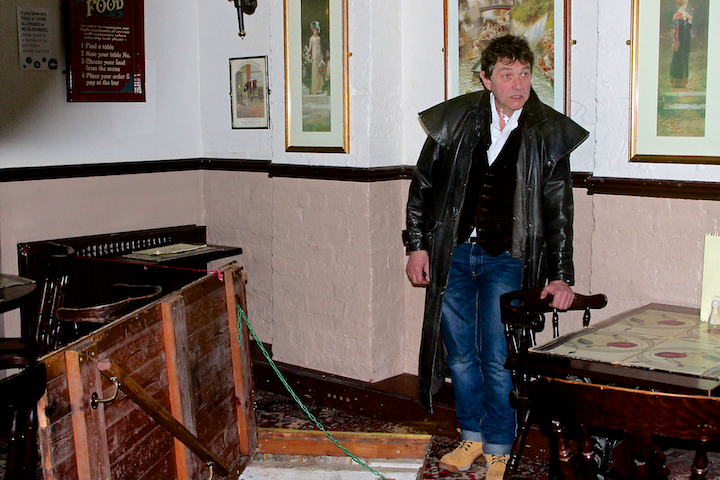 Richard Felix about to enter the tunnels © Travel Darkly

“It’s a shame we have to go through this pub,” Richard laughs as he props a chair up under the door.

He pulls away a rug to reveal a trap door with stairs leading down to the pitch black tunnels. Equipped with a torch each, we clamber down into them. 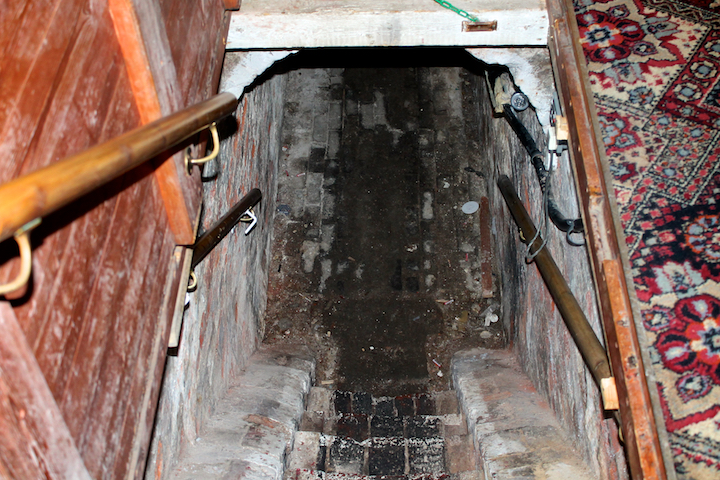 Through the trap door © Travel Darkly

What can currently be seen is only a small fraction of what’s beneath the city, and as we come to a heavily padlocked gate Richard says that he’s been trying to get access to further areas for years, but the council aren’t interested. “You could do a whole crime and punishment themed walk then,” I suggest. “EXACTLY,” he exclaims. 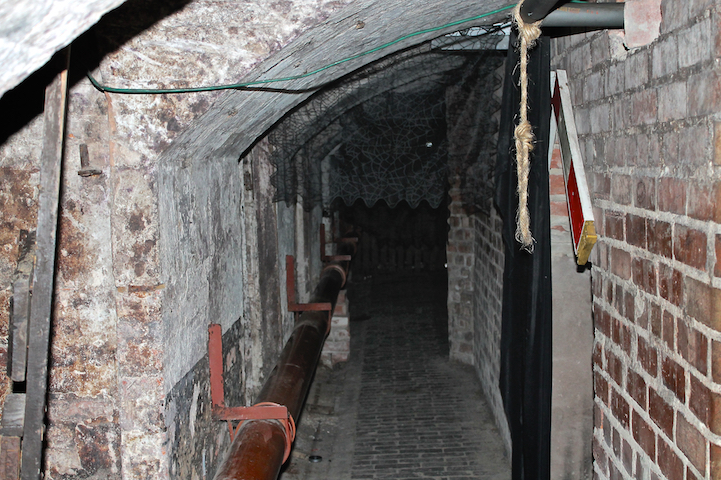 The tunnels are said to be haunted by the ghost of a twelve-year-old boy dressed in rags, first seen in the 1970s by a workman on the site who asked what the boy was doing there in the rubble to be told “I live here”. They lowered people into the hole to find nothing there, but ‘Sammy’ can be found today in a more tangible form… 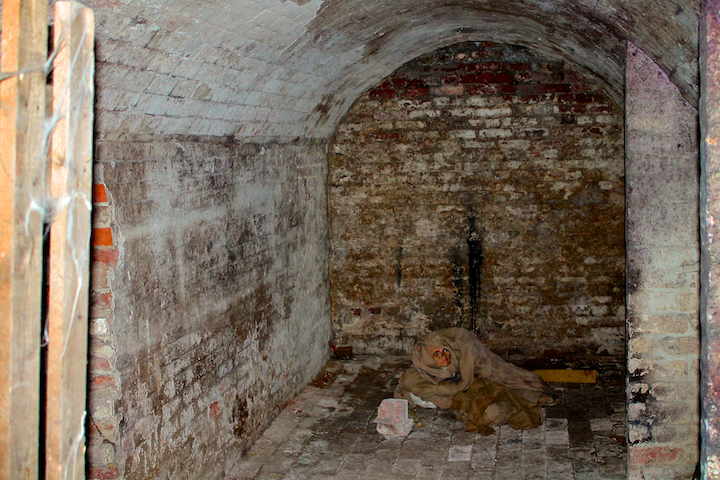 Sammy in the tunnels © Travel Darkly

Richard Thorley – who was the last person to be publicly executed in Derby in 1862 for slitting his girlfriend’s throat in a jealous rage – would have walked these tunnels. The spirit of the anti-war campaigner Alice Wheeldon, who was (probably unfairly) convicted of trying to kill Prime Minster David Lloyd George in 1917, is also said to haunt the tunnels she is likely to have walked.

As we exit the pub Richard talks about Derby’s potential as ‘the most haunted city in the Britain’ and his campaigning for tourist opportunities. His enthusiasm for the city is obvious (Richard also owns the Derby Gaol museum and runs the ghost walks, one which takes you down the tunnels).

“My missus has got the hots for you,” a man on the street shouts out as we walk past.

“Thank you,” Richard walks on.

– The Friary (a Scream pub and part of Derby’s Friargate Ghost Walk) – on the site of a former Dominican friary, legend has it that a black-robed friar haunts the pub’s basement. During the nineteenth century, the house’s owner Henry Mosley shot himself there. His unhappy spirit has allegedly been spotted in the bedrooms upstairs.

– Ye Olde Dolphin Inn – one of the oldest of Derby’s pubs dating from 1520, the cellars here were said to be used to store bodies stolen from their graves for dissection by a local physician.

– The Silk Mill – said to be haunted by the ghost of a Jacobite who was billeted there in the eighteenth century.