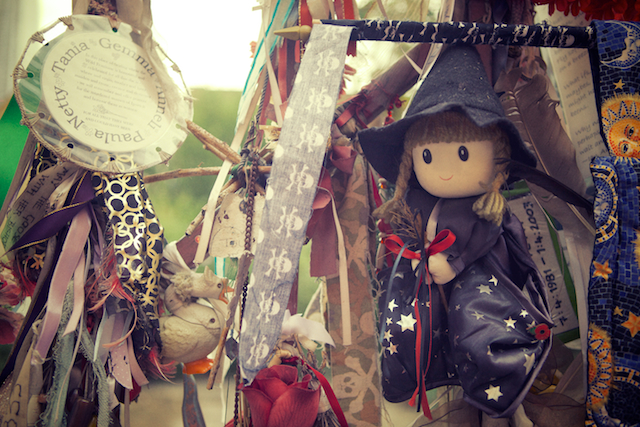 On Monday 23rd June (Midsummer’s Eve) we joined 25 people of all ages and nationalities who had come together to pay their respects to those buried at Cross Bones graveyard on Redcross Way in Southwark, London. If you’ve ever wandered past here you will have noticed the big iron gate covered in ribbons, jewellery, toys and photos.

Cross Bones is the final resting place for those once considered the dregs of society.

Although its exact age is a bit hazy, it was referred to as a ‘single woman’s churchyard’ (read: prostitute) in the sixteenth century, and by the eighteenth century had become known as a burial ground for paupers until its closure in 1853. It was only with the digging of the Jubilee line extension in the 1990s that the site was investigated, and Museum of London archaeologists excavated the crowded graves to find skeletons showing evidence of smallpox, TB and syphilis. Over a third of the bodies were pregnant or had just given birth, and 11% were under a year old.

The man behind the memorial gate is the eccentric and charismatic John Constable (aka John Crow the shaman when he’s at Cross Bones), a local poet, playwright and performer. John says he was drawn to the graveyard on the night of the 23rd November 1996 when he was visited by the spirit of ‘The Goose’: one of the prostitutes buried there.

At the time the prostitutes were known as the Winchester Geese as they were licensed by the Bishop of Winchester to work in one of the area’s many brothels – the ‘pleasure quarter’ south of the Thames. It’s believed that once these women died they were buried in the unconsecrated ground of Cross Bones, and therefore destined for hell (presumably a further hell than being a penniless, syphilitic prostitute).

John Crow holds a vigil at the gates on the 23rd of every month in remembrance of the poverty-stricken souls buried there (of which there are potentially 15,000), and this month marked the ten year anniversary of the very first vigil.

The ceremony starts at 7pm sharp, marked by incense, the ringing of bells and John Constable’s transformation into John Crow via a blue velvet jacket. Lots of people are obviously vigil regulars, but as vigil virgins we feel welcomed, if a little self conscious and awkward owing to the nature of the event and our proximity to John, who’s swinging his arms around and gesturing to people in the crowd.

He starts by saying that everyone is welcome (even bankers), and that ‘although we are not perfect we are complete’. He hands a candle to a girl while we ‘think of the light inside of us’ and hope for the release of the restless spirits of the graveyard during a minute’s silence. During this time two men wearing fluorescent jackets with Goose Samurai on them keep the crowd away from passing cars on the narrow street.

John is certainly a born performer and commands the event, singing songs, chanting and encouraging participation despite acknowledging the Englishness of the crowd (‘we’ll all be writhing bodies around the gate by the end anyway’… cue an anxious expression to Travel Darkly’s Sophie).

Others have things to say and play, including a druid who’s turned up and the very sweet 86-year-old Marion from New Jersey who reads a poem she has written especially.

We’ve all been given a ribbon to tie to the gate, and after that John explains that Transport for London have told him they can get rid of the shrine whenever they want to. He wouldn’t mind having to move the memorial down the street if necessary, but what they really want is a more permanent garden of remembrance (you can find the petition here).

After a few more songs comes the much anticipated writhing of bodies. We’re all told to hold onto the gate, or touch someone who’s holding onto the gate (Travel Darkly hold hands). There’s some chanting whilst a lady pours a semicircle of gin around us. After John ends the ceremony we all take a swig from the bottle.

This kind of event might not be everyone’s cup of tea, but the memorial gate is a poignant reminder of the value we attribute to human life, both in the past and the present. There aren’t just the names of those long dead tied to the bars, but mementos of recent deaths too. One member of the crowd has dedicated an area to his son. Despite TfL’s intentions, I think there will be quite a fight to keep this memorial alive.

Cross Bones vigils are held on the 23rd of every month, from 7pm, and last up to an hour or so. John also does walks around Southwark, and has published several books including his compilation of mystery plays inspired by The Goose, The Southwark Mysteries.

Update: Plans are underway with Bankside Open Spaces Trust, working closely with Friends of Crossbones, to create a garden on the site  – we look forward to seeing it.