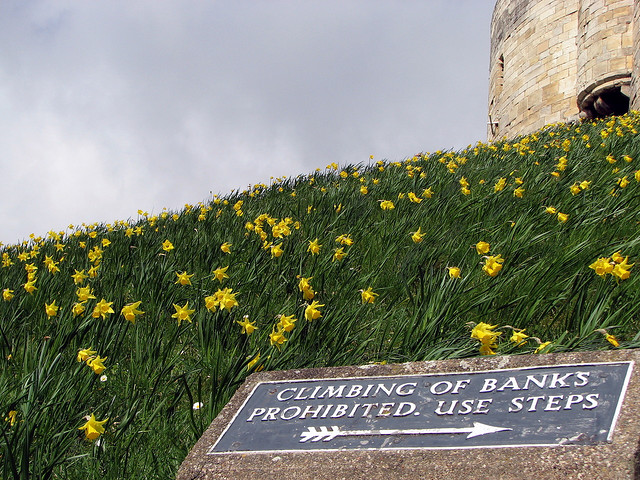 Clifford's Tower daffodils © Glen Bowman
Clifford’s Tower was the site of a mass suicide in the twelfth century. Standing proudly on top of a great mound in the centre of York, it was built in 1068 and has been refortified over the centuries to protect the north of England from attack. The tower has been used as a prison and was also the place Henry VIII used to display the bodies of his northern enemies. But the darkest period of its history relates to the 1190 massacre of York’s Jewish community.

The massacre of the Jews

In 1190 an estimated 150 Jewish people committed suicide, or were burnt or murdered, on the site of Clifford’s Tower. The massacre was the result of a long history of religious tension and intolerance between Christians and Jews. Persecution of Jewish people can be traced back to the First Crusade a century earlier, as Christians sought to reclaim the holy land and assert their legitimacy as a faith. The Crusades were used as an convenient excuse to attack local Jews – in medieval theology held responsible for the crucifixion – who were often relatively wealthy as, unlike Christians, they weren’t prohibited from money lending.

Tensions were high by the twelfth century and riots against Jews broke out across several English cities including Norwich and Lincoln as well as York. In York, attacks had the support of local gentry, who often owed Jewish money lenders cash that they would never be able to pay back. Ironically, Jewish people were the king’s ‘special subjects’ and were granted royal protection. For this reason they barricaded themselves in the (then wooden) tower and refused to come out.

The royal constable ordered the tower be captured, and knights and a baying mob gathered outside to see the Jewish community punished. Most of those inside opted to commit suicide rather than face what waited the other side of the walls, killing their children before themselves. Others were burnt in the fire they created to prevent their bodies being mutilated after their death, while some surrendered and were promptly murdered by the crowds.

The blackened remains of the fire were unearthed during twentieth-century excavations, and later six-petal daffodils were planted around the tower to represent the Star of David. Clifford’s Tower is one of the staples on the York ghost tours, where its red stonework is said to be the result of the Jewish blood spilled there – a reminder of the city’s atrocity. In fact its colour is down to a fire in the seventeenth century which caused the iron ore to make its way out from the stone. The massacre is notably absent from the ‘History of Clifford’s Tower’ page on English Heritage’s website, although there is a Most Haunted style ‘spooky podcast’ on there, featuring a paranormal investigatory team apparently making contact with a 16 year old girl who died in the tower during the fourteenth century.

Tower Street, York, North Yorkshire, YO1 9SA. There is a council-operated car park at the bottom of the steps of the tower, plus several car parks around York centre as well as a Park and Ride scheme.