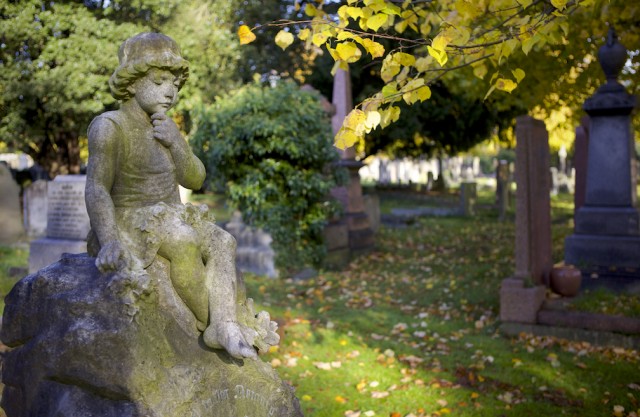 The Grade I listed City of London Cemetery and Crematorium, in north east London, was opened in 1856. It’s one of the biggest non-military cemeteries in Europe, with 200 acres of beautifully kept gardens where burials are still taking place. There are over 150,000 graves on the site, so many that new burials have started to be put on top of the older ones.

The seventeenth-century highwayman Claude Duval and scientist Robert Hooke are said to be buried here, and the cemetery also contains plaques commemorating the deaths of two of Jack the Ripper’s victims: Mary Ann Nichols and Catherine Eddowes.

The flower-strewn graves of the victims of Jack the Ripper can be found either side of the path in ‘Gardens Way’, to the east of the cemetery. Mary Ann Nichols is believed to have been the first of his five victims, murdered on the 31st August 1888 aged 43. Catherine Eddowes was his fourth victim; murdered on the 30th September 1888 aged 46, less than an hour after the third victim Elizabeth Stride (a night now known as the ‘double event’ of the Ripper killings). The plaques used to have “victim of ‘Jack the Ripper” on them, but since 2003 have been replaced with ‘Heritage Trail’ markings instead (the cemetery sometimes has tours which include these graves).

The cemetery is open on Monday-Friday from 9am-7pm in the summer and 9am-5pm in the winter, and on Saturdays and Sundays from 9am-5pm. Entry is free.

Special thanks to photographer Simon Montgomery for taking the pictures for this post.