There are catacombs all over the world, the largest and most famous being the Paris catacombs. But a couple of days by train from Paris – or a short flight if you’re that way inclined – is an altogether grizzlier ossuary…

In Sicily’s capital, Palermo, we are told the Mafia once had such a hold on the island’s finances that money was diverted to the Mob and away from useful things like city repairs. This left the pockmarked sandstone buildings to weather and peel over the years, creating something of an Italian Havana. What’s left is charm and a kind of beauty, plus the odd chicken roaming the streets.

In summer there seems to be a wedding in every tiny church in the city, the bride kneeling at the altar in a sea of white next to her groom, men in suits positioned carefully at the door.

Horses parade around pulling brightly decorated carts. The ancient city gate, Porta Nuova, has atlantes or telamons that depict the defeat of the Moors by Carlo V.

All this makes for a wonderful walk to the Capuchin catacombs, where many of the town’s deceased citizens will greet you.

The entrance is to the side of the cemetery. A man sits at the desk just inside with postcards for sale depicting what you are about to see, which should serve as a warning against taking small children inside.

“Approximately 8,000 mummies line the passageways of the Capuchin catacombs.”

The first corpses were placed here in the sixteenth century when the fathers of Palermo’s Capuchin monastery exhumed some of the bodies from their cemetery and noted that the dry soil in the famously hot city had naturally mummified them.

The exhumation of the bodies of religious peoples has a long history in Italy and elsewhere, and the better preserved they are when exhumed, the more miraculous they are often believed to be. The most famous example of a preserved saint is probably that of the body of St. Bernadette in Lourdes, not too far from Paris.

The monastery fathers, noting how the mummification process had taken place in others, preserved the body of recently-deceased Brother Silverstro for the purpose of public viewing. Following this it became fashionable for the wealthiest inhabitants of Palermo to have their bodies preserved in the catacombs.

The wealthy citizens left wills stating how they wished to appear, often picking out their Sunday best so they would serve as fine momento moris for their grief-stricken families. Some would even request their clothes be changed from time-to-time.

The catacombs were officially shut down in 1880, yet one of the last to be interned before the practice was banned was the body of two-year-old Rosalita Lombardo, in 1920. Called ‘Sleeping Beauty’ her body is still perfectly preserved and she, along with a few other children in the catacombs, is a reason you should consider carefully whether you really wish to visit at all. The children’s bodies are, after all, deeply unsettling to even the most macabre-loving viewer.

Rosalita Lombardo was preserved by Alfredo Salafia from Palermo, a Sicilian taxidermist and embalmer, who took the secret of her embalming to his grave. However the National Geographic’s Expedition Council funded biological anthropologist Dario Piombino-Mascali to do some digging around and he eventually discovered the secret formula in Salafia’s notes. You can read the full article here.

The mummies are arranged by category: holy men, virgins, children, women, men and professionals. Some are posed, others loom over passing tourists as if watching them.

“Some of the mummies have not kept as well as others, the skin having receded so they look as if they are screaming.”

Monks wear their robes and have the ropes they wore as penance in life around their necks. Priests hang on walls in rows also dressed in robes. Some mummies even wear military uniform.

Surprisingly, given that he died in Seville in Spain, the Spanish painter Velasquez is rumoured to remain here for all eternity alongside Giuseppe Tomasi di Lampedusa, who penned Il Gattopardo (The Leopard) the most famous work of Sicilian literature. Tomasi is actually buried in the cemetery next to the catacombs. If you want to visit the cemetery be sure to check the opening hours first, as they have been known to change.

Extra special thanks to Paul Koudounaris in LA who took the photographs of the mummies used in this article. You can see them at his wonderful site www.empiredelamort.com. He has a couple of books:

Heavenly Bodies: Cult Treasures and Spectacular Saints from the Catacombs

The catacombs are open from 9am – 1pm daily and then 3pm – 5pm every day but Sunday. It’s best to try and arrive an hour or more before closing as this will give you time to look around and allow for any early closures. They are located at Piazza Cappuccini, 1, Palermo, Sicily, Italy. The office line is +39 091 212117.

The walk is not for those who can’t stand the summer sun, as Palermo often heats up to a sizzling 40˚C. At the time of writing we were pretty much the only ones doing it. (Mad dogs, Englishwomen).

From the centre, walk along Vittoria Emanuele, passing the delightful Cathedral of Palermo. 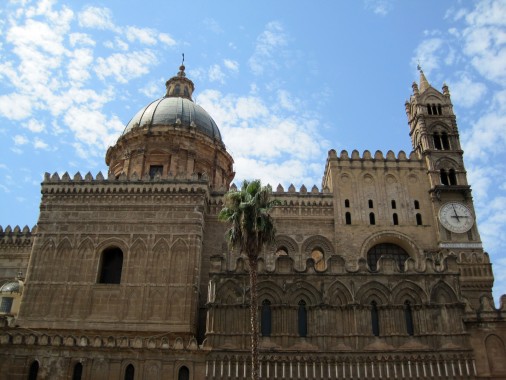 Turn onto Corso Calatafimi, right onto Via Cappuccini, right again onto Via Pindemonte and hey presto! You are at Piazza dei Cuppuccini. Do enjoy…