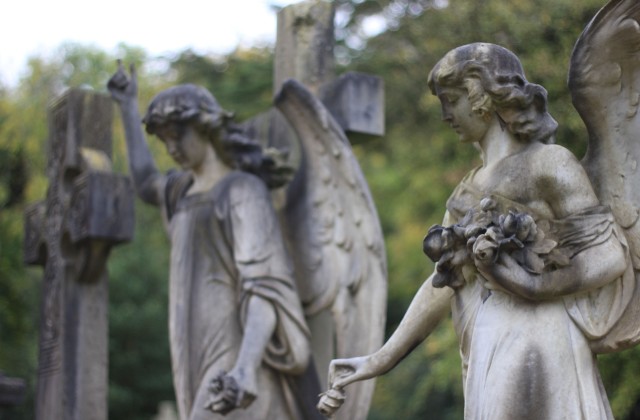 The beautiful Victorian Arnos Vale Cemetery in Bristol was built in 1837. Before this people were living with smelly and diseased graveyards (thanks to the pests that the bodies attracted) near their houses. Arnos Vale was set up as a more hygienic alternative to these inner-city burial grounds. The Greek-style cemetery stretches over 45 acres and is the final resting place of more than 300,000 people. During the twentieth century it fell into disrepair, but a Heritage Lottery Fund grant in 2006 has helped to restore the site. The graves there reveal the lives of those who changed the course of history, as well as the stories and plights of ordinary Bristol people who died before important medical discoveries were made.

In 1849 there was a severe outbreak of cholera in Bristol. The disease hit the Stapleton Workhouse particularly hard, where some of the city’s poorest people were living. At this point no-one was aware that cholera was spread through dirty water, infected by sewage. The young surgeon Dr. Joseph Williams chose to stay and tend to the sick at the workhouse, and eventually contracted the disease and died. His grave shows the image of a pelican – thought to peck its own breast and draw blood to feed its babies (although this is a myth). The grave symbolises Joseph’s self-sacrifice during the deadly epidemic that year.

One man who witnessed Bristol’s cholera outbreak in 1849 was Dr. William Budd. Budd had been interested in the physician John Snow’s work on cholera in London. Snow was sceptical of the widely-held ‘miasma’ theory of disease; that germs were spread through toxic ‘bad air’. He famously discovered that the 1854 cholera epidemic in Soho could be traced back to a public water pump, built just feet away from an old cesspit which was leaking faeces into the water. Budd used the same method as Snow in London to plot the areas that people had died to prove that water was the root of the problem in Bristol too. His contribution to epidemiology saved hundreds of lives in the city over the next few decades.

Lack of understanding about the causes of disease in Victorian England impacted on children in particular. There were no vaccinations against childhood diseases like scarlet fever, whooping cough, mumps or measles. The Terrett family grave shows the devastating effect that these illnesses could have, with 7 of their children’s deaths listed. The mother Sarah Terrett is said to have died ‘while engaged in her best loved work of rescuing the perishing from drunkenness and sin’.

Further into the cemetery, a grave with a sculpted angel dropping flowers stands above the burial of 3 year-old Nesta, who died of pneumonia in 1928 before the advent of antibiotics.

In the same year of 1928, Arnos Vale installed a crematorium to help deal with the increasing demand for burial space. During cremation the coffin and body are placed in an extremely hot brick-lined furnace until only ash and the largest bones remain. The bones are then crushed to a powder in the ‘cremulator’ before being scattered.

Arnos Vale Cemetery, Bath Road, Bristol, BS4 3EW. The cemetery can be found on the A4 Bath Road in south east Bristol, a mile away from Bristol Temple Meads train station. The number 1, X39, 57, 178 and 349 buses stop outside, and there are a small number of car parking spaces on the site itself.