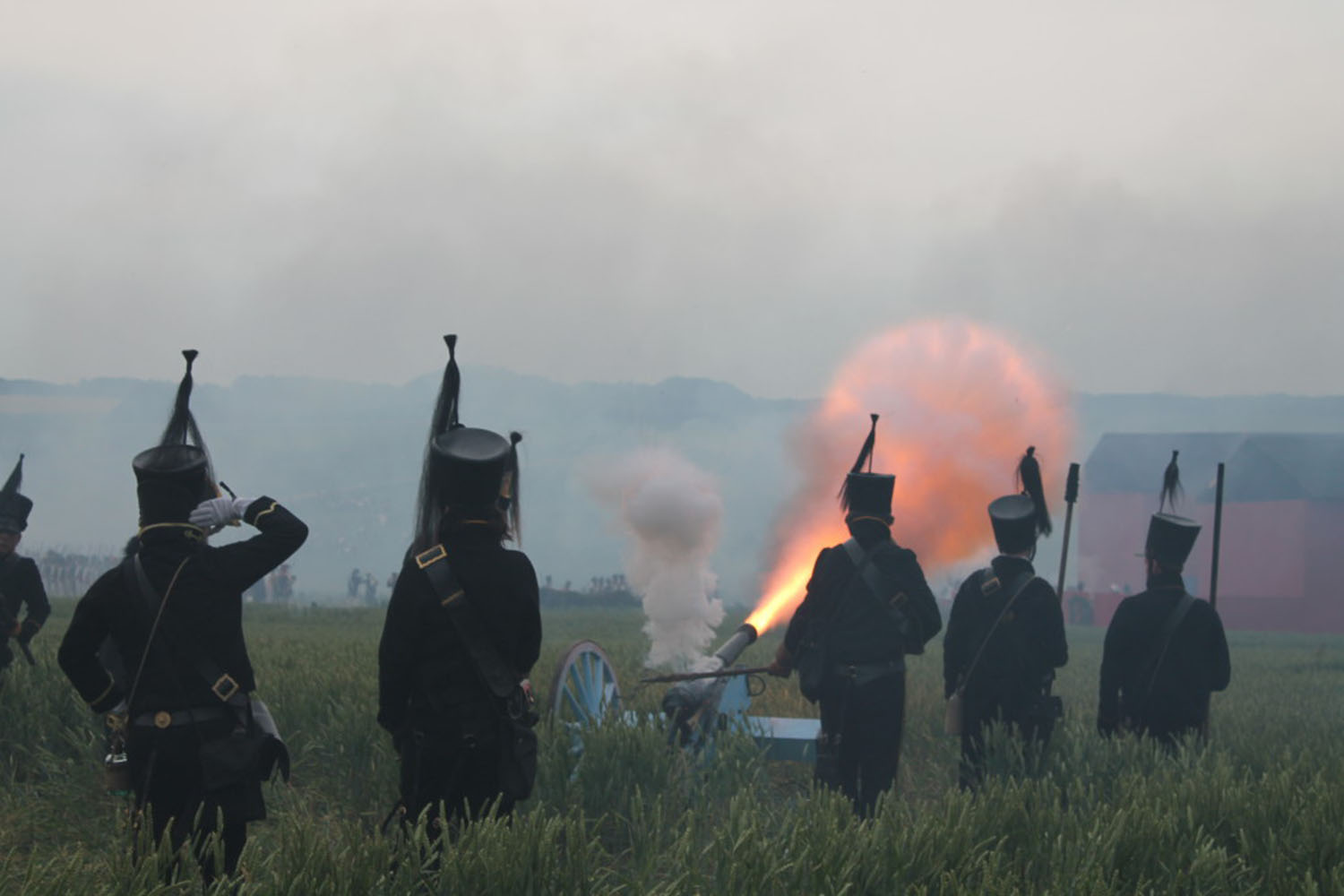 The bicentenary of the Battle of Waterloo saw somewhere between 5,000 and 6,000 reenactors descend onto the famous battlefield to reenact the day-long fight that finally brought peace to Europe in 1815.

From 1804 one little man – Napoleon – had had the rather big aim of bringing together an empire in Europe. The British had thwarted these grand plans at the Battle of Trafalgar in 1805 but Napoleon was unabated, and went on galloping through Europe invading countries here and there before being forced to step down.

This wouldn’t deter him either, however, and he reached Paris in 1815 at which point Britain, Austria, Prussia and Russia declared war.

In June he marched to Belgium with the aim of taking over Brussels and sent men to Waterloo. Here the Duke of Wellington and the British, and General Blucher and the Prussians, battled Napoleon and the French for a day until finally he was defeated. (Although he only properly surrendered a month later and there was no dramatic death scene – he was exiled to Saint Helena where he died in 1821).

Peter Catley is sitting with an empty flagon on a bench in front of him. (It had tea in it, not beer).

TD: How long have you been reenacting for?

PC: Round about 20 years. This is my 17th Waterloo, I missed one when my son had GCSEs and a couple of others for other reasons. I tried very hard to get here.

TD: How did you get into it?

PC: When my son was 15 he asked to go to this big International Napoleonic Fair in London so I went along with him. He met some reenactors there and wanted to get involved – so we did three, then I decided to do it as well. He stopped when he went to university but I carried on.

TD: Did he study History?

PC: Yes, my daughter Susan is my minder and driver so I’m very lucky. I used to come alone and camp but now I stay in a B&B.

TD: And what do you have to do to get here?

PC: You have to join a regiment. We’re the 44th East Essex Regiment of Foot.

PC: Basically they will get their kit on and march up – it takes over an hour to get out to the battlefield. It’ll be a good one.

A man with a moustache walks past as we’re talking to Peter Catley, “are you lying to the press again Peter?” he quips.

TD: Would you like to come and lie to us instead? (grin) What’s your name?

WEJ: I did have Christian names but I’ve long since forgotten them. If the name worries you you can write me out a cheque.

TD: And how long have you been doing this?

WEJ: Well for the better part of 200 years but…

TD: Woah, how long has reenacting been a thing?

WEJ: It started to get going in the late 60s, taking off properly in the 70s. The group I joined were celebrating their first birthday when I arrived.

TD: Where do you go?

WEJ: It’s got me all around the planet – a lot of Europe obviously but as far as New South Wales.

TD: Have you done any films?

WEJ: Yes, we used to get hired a lot more – but now we come in as specialists. The Sharpe films were very good and I was chief of staff to Wellington who was played by Stephen Fry in Blackadder.

TD: Good to see women as soldiers, what’s your name?

TD: How long have you been doing this?

C: Twenty years – I was a Spanish partisan before this but then I was on my own. They wouldn’t have women in the beginning but I fought my way in. There are lots more women on the French side.

Louise blows into the bugle until it sort of parps and then bursts into laughter.

TD: How long have you been playing it?

L: Two weeks! I don’t have a musket so I’m stuck with the bugle. I’m afraid to practice at home because of what the neighbours either side will think.

TD: How long have you been reenacting?

L: This is my second event, the first was near Nottingham at Wallington Hall, which was in preparation for this. There were lots of people there but most of them were from the UK.

TD: What do you do day-to-day?

TD: How did you get into reenacting?

L: Through my boyfriend Mark.

TD: How long have you been together?

TD: How did you meet?

L: We met on a dating site but he wasn’t doing this at the time – not that that would have put me off.

TD: How often do you reenact?

L: The guys I travel with have French uniforms too – because if you play French you can always get a gig (she smiles). They do it about 12 times a year.

TD: How do you go about getting the costume?

L: The regiment will buy a whole bolt of cloth then either get someone to make them up or people make their own. Think I’ll get a girly outfit too soon – when it’s this hot it might be nice not to be in uniform, I saw all these girls floating about earlier in their dresses and thought – ‘I could do a bit of that.’

TD: Do you have to join something to take part?

L: Yes, we’re all members of the Napoleonic Association.

AL: Perhaps the biggest victory of the weekend (other than winning the battle) was proposing to my girlfriend on the battlefield.

How to get to the Battle of Waterloo sites

Book the Eurostar from London to Brussels from £72  – or from £69 if you’re under 26 or over 60. The train takes two hours. From Brussels Gare du Midi, there are red and yellow buses that take you to the Battle of Waterloo sites. The bus on the W line goes to the Lion’s Mound (where the battlefield is) as well as the Wellington Museum. The stop for the Lion’s Mound is ‘Lion route de Nivelles.’ The stop for the Wellington Museum is ‘Waterloo Eglise.’ The 365 bus goes to Waterloo Centre as well as Napoleon’s last headquarters at Charleroi. The 365 also picks up from Brussels Gare du Midi outside the IBIS hotel. The bus ticket is €8, available from the drivers and valid for a day.


The tourist information website has more information about public transport as well as details of how to drive to the sites.

How to join the Napoleonic Association and become a reenactor