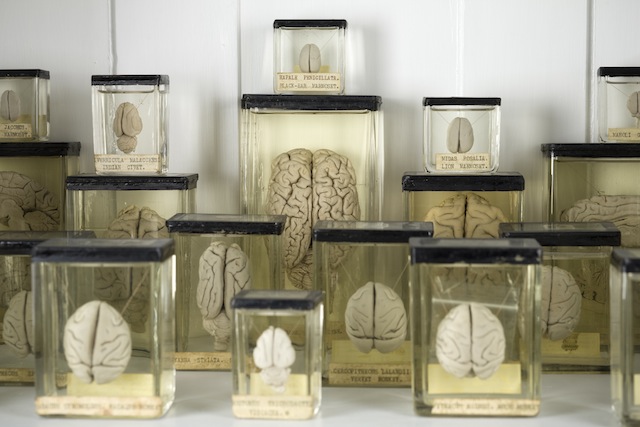 On a corner not far from University College London’s main building (with its dead philosopher),  just past a cheeky little bust of Charles Darwin by the window, is the entrance to the Grant Museum of Zoology in the Rockefeller Building. The museum is contained in one room filled with cabinets, containing jars with preserved animals and parts of animals floating inside them as well as a fair few skeletons for good measure.

It smells like a Victorian library and has the feel of one too.

The Grant Museum of Zoology was set up in 1827 by Robert Edmond Grant to exist as a teaching resource at the new University of London – now UCL. Grant was the first Professor of Zoology and Comparative Anatomy in England. This meant he had nothing to teach with and had to start from scratch. He proptly set to work amassing specimens, stuff for dissection, diagrams and lecture notes and these are at the heart of the museum today.

By the counter at the front, is a jar of moles. We can’t imagine this jar has ever made a school raffle, ‘count the moles in the jar and you’ll win ALL THE MOLES to take home with you.’

It’s also possible to adopt an exhibit. Many of the jars and cases with specimens suspended in yellow-tinged liquid have little bits of folded card atop them with names written like place names at a dinner.

One of the most ‘interesting’ of the adopted dead animals is one of the more recent; a domestic cat, ‘Little Nicky’, who in 2004 was the first commercially cloned cat, produced for $50,000 after the original Nicky died. Anne Rushbrooke is the lucky lady who donates to the museum to take care of Little Nicky’s upkeep.

Other exhibits include the crescent nail-tail wallaby, which died out in the 60s, a Parrotfish head, which indeed resembles a parrot’s head, and a tiny young Galago lizard, ‘stained’ – so that soft tissue is clear and hard tissue is red. Then a jar of lizards and a jar of  ‘assorted snakes.’

There’s an elephant’s heart, which weighs between 20 and 30kg and if it were inside an alive elephant would be beating 30 times a minute. There’s the head of a dog and a bisected cow’s head as well as the fascinating column of light called the Micrarium, which consists of three walls of slides with the the tiniest of specimens on them, from tiny fish to tiny plants.

The Grant Museum of Zoology is open Monday – Saturday 1pm – 5pm aside from a few days around Christmas and Easter during university holidays. Access is step-free and children of all ages are welcome, although children under 11 must be accompanied by an adult.

King’s Cross and Euston train and Underground Stations are in walking distance, as are Euston Square and Warren Street Underground stations.

Huge thanks to the Grant Museum for all their help and for kindly giving Travel Darkly permission to use their photographs by Matt Clayton for this article.